A video has been viewed hundreds of thousands of times in multiple posts on Facebook, Twitter and YouTube alongside a claim it shows an Islamic call to prayer in Berlin after black clouds appeared in the sky. The posts claim the call was heard despite there being “no mosque” in the area. The claim is false; the video shows a call to prayer that was broadcast by a mosque in Berlin; the call was staged as a nearby church rang its bell in April 2020 as a sign of unity during the coronavirus pandemic.

This two-minute 58-second footage shows people using their phones to record a scene on a street as an Islamic call to prayer rings out. It was published on Facebook on June 12, 2020. It had been watched more than 187,000 times and shared over 5,000 times before it was removed.

The post's Indonesian-language caption translates to English as: “In Germany Berlin there was a strange event, suddenly there were black clouds, and the call to prayer reverberated, even though there was no mosque, what was this sign...” 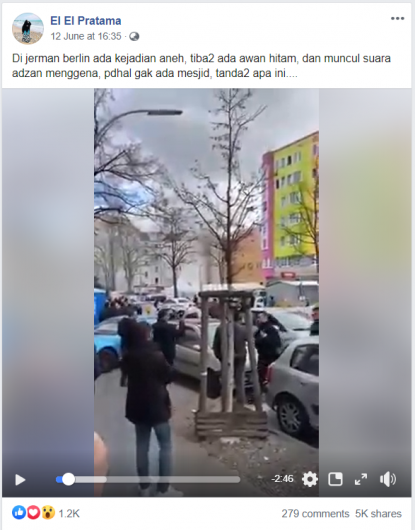 The same footage with a similar claim in Malaysian language has been viewed more than 6,300 times after it was posted on Facebook here, here and here.

A reverse image search on Google followed by a subsequent keyword search found the same footage was published here on Facebook on April 3, 2020.

Translated from Turkish to English, the post’s caption reads: “03.04.2020 Adhan sound reverberated outside through speakers in Neukölln in Berlin during Friday prayer time”.

The area captured in the misleading footage corresponds with the location seen in the video shared by the mosque. It also corresponds with Google Street View imagery of the Dar Assalam Mosque here.

Ruptly, a Berlin-based Russian video news agency, also posted this similar clip of the same scene on its YouTube channel on April 5, 2020. It is titled: “Germany: Mosque"s call to prayer ends early after physical distancing breaches.”

The first paragraph of the clip’s caption reads: “An estimated 300 people gathered outside the Dar Assalam Mosque in Berlin on Friday where they listened to a call to prayer that was held in conjunction with bell-ringing at a nearby church, in a sign of solidarity during the COVID-19 crisis.”

The mosque also shared a video of the event on its Facebook page on April 4, 2020, here. Translated from German, the post’s caption reads: “A video clip from DW about the initiative “I hear your call - a call to prayer as a sign of solidarity during the corona crisis.”