Multiple Facebook and Twitter posts shared hundreds of times claim that Australian TV host Waleed Aly applauded an “African gang” over an assault of a young girl at a train station. The claim is false; the accusation was originally published in a satirical article; a spokesperson for Aly's show The Project said the claim had “no basis of truth or fact whatsoever".

The claim about Aly was published on Twitter here on June 21, 2020. The post has since been retweeted more than 300 times.

The tweet reads: “Waleed Aly applauds African gang who assaulted young girl at train station for ‘courageously standing up to white privilege’. Get him off our tv and out of this country - his views are obscenely at odds with the Australian way of life.” 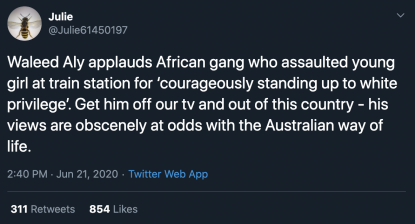 But the claim is false; the accusation appears to have originated from a satirical article and has been refuted by The Project, the Australian news and current affairs programme that Aly has co-hosted since 2015.

The claim was published here in the satirical section of a website called XYZ on June 19. The article is titled: “Waleed Aly applauds African gang who assaulted young girl at train station for ‘courageously standing up to white privilege’”. 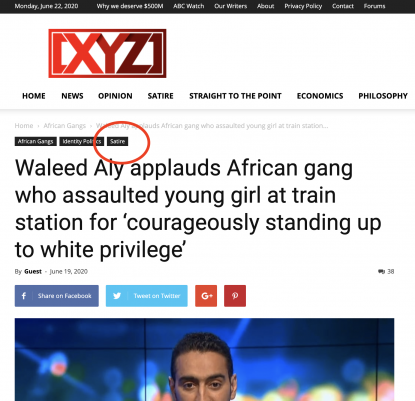 A screenshot of the XYZ article as of June 22, 2020, with the satire tag on the article circled in red by AFP.

The satirical article reads in part: “Project panellist Waleed Aly has applauded the assault of a white teenage girl at Southern Cross Train Station in Melbourne earlier in the week, lauding the attack as a ‘stunning and brave assault on white privilege.’

"In a 15-minute lecture on The Project last night that some critics have claimed was ‘Waleed at his patronising, race-baiting best,’ Aly had to hold back tears several times as he narrated the gang’s ‘struggle against systemic oppression.’”

A day before the satirical article was published, Melbourne newspaper Herald Sun reported here on June 18 about a viral video that purportedly shows an attack targeting a 16-year-old girl at Southern Cross train station in Melbourne.

The term "African gang" was adopted by conservative media to describe young people of African appearance who had committed violent offences in Victoria since the mid-2000s. However, Victoria Police had raised doubts over whether the term had overstated the issue, The Guardian reported here in January 2018.

In response to the satirical article, The Project stated here on its verified Twitter account that the claim has “no basis of truth or fact whatsoever.”

“As you’ll see at the top of the article, it says ‘satire’. Incredibly poor taste, but essentially someone has written this thinking it’s funny or clever. It has no basis of truth or fact whatsoever,” the tweet reads.

As you’ll see at the top of the article, it says ‘satire’. Incredibly poor taste, but essentially someone has written this thinking it’s funny or clever. It has no basis of truth or fact whatsoever.

Susan Carland, Aly’s wife, also responded to the claim here on Twitter, stating that the article was “not real”.

FOR GODS SAKE PEOPLE THIS IS NOT REAL. pic.twitter.com/aVwzAEokeK

Carland added in another tweet here: “To clarify: I’m not upset. Weird & blatantly untrue things about my husband are merrily posted online regularly & most I ignore (‘someone’s wrong on the internet’ isn’t a way to live a life). But this astounded me because so many people believed something so obviously fake.”

Network Ten, which airs The Project, and Creative Representation, Aly’s management agency, did not immediately respond to requests for comment by AFP.