This video shows an alleged kidnapping in Indonesia, not Malaysia

A video has been viewed hundreds of thousands of times in multiple Facebook posts which claim it shows a child being kidnapped at a Tesco supermarket in Malaysia. The claim is misleading; the video has circulated in media reports about an alleged kidnapping in Indonesia, not Malaysia.

The video has been viewed more than 4,000 times.

The Chinese-language caption of the post translates to English as:  “(forward) tesco Penang 2 kids missing... It's really outrageous! Too dangerous! So remember to take the children out of the house must take the lead! Really be careful!” 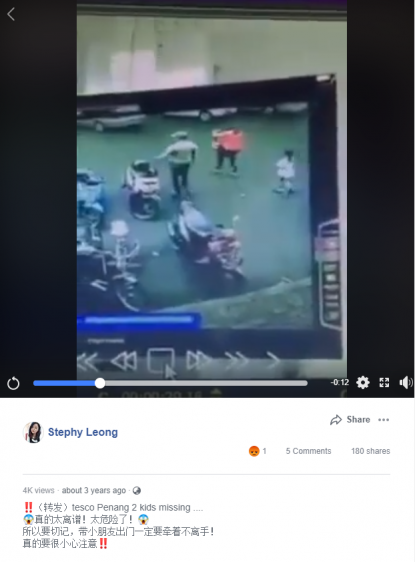 Screenshot of one of the misleading posts

The footage shows a woman carrying several bags in her arms while a young girl walks closely behind her. A man wearing a hat walks up to the girl, grabs hold of her and runs off away. The woman runs after the girl, but is blocked by two men, who push her to the ground.

The same video was shared here, here and here on Facebook with a similar claim.

The same video was also shared in this Facebook post by a user who claimed in comments on the post that the incident happened in Malaysia. The video has been viewed more than 635,000 times.

The claim is misleading; the video has circulated in media reports about an alleged kidnapping in Indonesia, not Malaysia.

A reverse image search for screenshots of the video on Yandex found this video published on June 3, 2016, on the official YouTube channel for CNN Indonesia. It contains the same 15-second clip as the video in the misleading posts from the 20 seconds mark to the 35 seconds mark.

The CNN video has an Indonesia-language headline that translates to English as: “Outrageous! Footage of Child Kidnapping in Front of His Mother in Tangerang”.

The video's caption translates as: “An 8-year-old child named Evelyn Tiandi was kidnapped by 4 unknown people, after shopping with her mother. The kidnapping in the Cikupa area, Tangerang, which was recorded by CCTV, was believed to be planned. It was carried out in a coordinated manner.”

Below are two screenshot comparisons between the footage in the misleading post (L) and the CNN video (R):

This Kompas TV video published on its official Facebook page on June 4, 2016, also contains the same footage of the video from the nine seconds mark to the 24 seconds mark. Its headline translates to English as: “8-Year-Old Child Kidnapped by 4 Unknown People”.

The caption translates to English as: “Another child kidnapping occurred. This time the victim was Evelyn Tiandi, an eight-year-old child. Evelyn was kidnapped by 4 unknown people after shopping with her mother at a mini-market in Cikupa, Tangerang, Banten.”

The same story was covered by multiple Indonesian news outlets in June 2016, including Kompas, Pos Kota and Liputan 6.

This follow-up report published by Liputan 6 on June 5, 2016, states the girl's father allegedly abducted her following a child custody dispute. The headline states: “The ‘Kidnapper’ of Child Evelyn Is Her Own Father.”