In the days following Canada’s national holiday on July 1, 2019, several online publications featured photos depicting the world-famous Niagara Falls illuminated with a Canadian-flag light display. While the waterfalls display coloured lights nightly, the Canadian Maple Leaf has never been projected on the waterflow.

“Have you ever seen Niagara Falls on Canada Day?” asks a post shared 1,700 times from the Facebook page Only In Canada. Below the caption, a photo of the waterfalls that straddle the United-States-Canada border near Toronto shows an immense light display of the red and white Canadian flag, complete with a red maple leaf in its center. Many online users also interacted with the photo via Reddit. 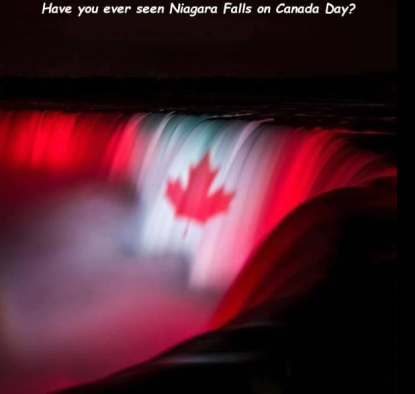 However, the image does not reflect the reality of light shows at Niagara Falls. Colored lights shine on the waterfalls every night, though they are not as intricate as the photo suggests.

Tony Baldinelli, communications manager for Niagara Parks, confirmed to AFP that a maple leaf was never projected onto the falls, due to the Niagara Falls Illumination Board policy.

“We don’t allow the projection of images onto the falls,” David Adames, CEO of Niagara Parks and member of the Illumination Board, told AFP. “The Niagara Falls are a global icons so we don’t want to take away from the natural elements of the falls by projecting images,” he explained. 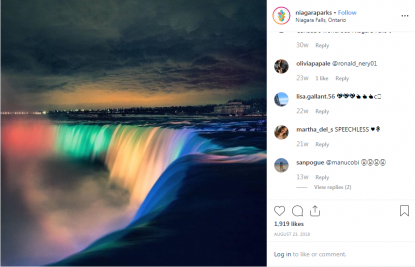 On special occasions, the falls are basked in colors of symbolic value, such as green on Earth Day, red on Remembrance Day, or red and white on Canada Day. This 2017 photo published in The Globe and Mail shows how the light display illuminates Niagara Falls on Canada Day from the same angle as the fabricated image. 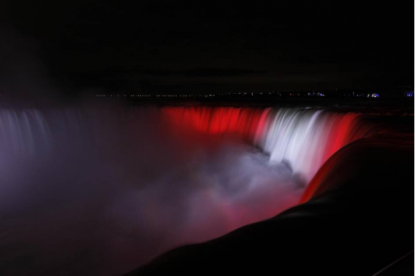 Screenshot of a photo published on The Globe and Mail on January 10, 2017 (Light Monkey Photography)

This photo on Canada’s weather network website shows the falls on Canada Day 2019 from an aerial point of view.

Protesters set fire to Burkina Faso’s parliament in 2014. Why is it trending in Kenya now?