A photo of rosaries confiscated from migrants and discarded by the US Customs and Border Patrol (CBP) continues to be shared in posts on social media in June 2019, almost four years after it was captured. Photographer Tom Kiefer told AFP he took the image in July 2015 after having worked as a janitor at a CBP processing facility in Arizona until 2014. Current CBP policy states migrants’ personal property should be returned to them after they leave a CBP facility. But representatives from an NGO working at the US southern border told AFP that detained migrants continue to report some personal items confiscated by the authorities have never been returned to them.

The post features an image of wedding rings next to an image of rosaries. Beneath the images, the text states: “Wedding rings taken from Holocaust victims. Rosaries taken from immigrants at the US border. Those who do not learn from history are doomed to repeat it.” 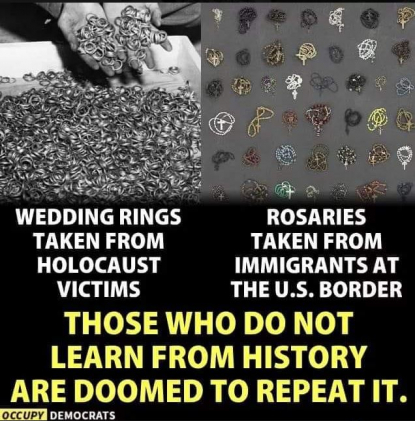 A reverse image search on Google found the photo of the rosaries published in this article by The New Yorker magazine on March 12, 2017.

The headline states: “A Janitor Preserves the Seized Belongings of Migrants.”

Below is a screenshot of the photo in the article: 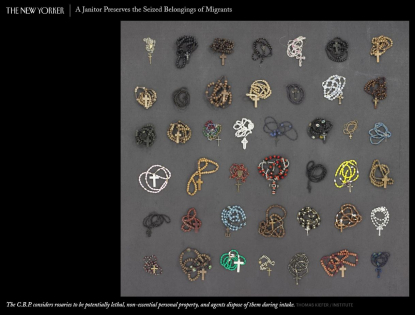 Photographer Tom Kiefer told AFP in an email on July 2, 2019 he took the image in July 2015 after having worked as a janitor at a CBP processing facility in Arizona until 2014. He said the image showed rosaries confiscated prior to 2014.

This was years prior to President Donald Trump declaring a national emergency on the US southern border.

Kiefer told AFP he retrieved the rosaries from the trash at the CBP processing facility in Why, Arizona. “I came upon these as I was removing the cans of food in the trash the migrants and asylum seekers carried in their backpack. I asked and was given permission to collect the food and bring it to our local food bank,” he said.

He said he left his job with CBP in 2014 to work full time on photographing the items he had collected. “When you take away, separate, remove such a deeply personal and religious item from someone and it ends up in the trash, that is disturbing.”

Kiefer discusses items he retrieved in this YouTube video published on June 28, 2018 for an exhibition at the Saugatuck Center for the Arts in Michigan.

On his official website, Kiefer named his collection of images of discarded personal effects “El Sueño Americano” which translates to English as “The American Dream.”

The photo of rosaries continued to be shared thousands of times here on Twitter in June 2018 amid increased media attention on the caravans of Central American migrants walking to the US border.

Here is an article published by online magazine Insider on June 27, 2018 in which Kiefer’s photos were featured again.

That article was retweeted thousands of times on Twitter here in June 2019.

Kiefer has since removed the image of the rosaries featured in the posts from his website and social media accounts. He told AFP, “I reshot the exact rosaries in a different configuration.”

The policy states: “All detainees’ personal property discovered during apprehension or processing and not deemed to be contraband will be safeguarded, itemized according to the operational office’s policies and procedures, and documented in the appropriate electronic system(s) of record.”

Point 7.4 states: “At the discretion of officers/agents, a detainee may keep some personal items in their possession, as long as a particular item does not pose a threat to the security or good order of the facility.”

A CBP official told AFP by email on July 11, 2019: “Items that have a cord/rope/string could pose significant officer and detainee safety hazard (choking, suicide and strangulation) and should be secured in the individual’s property.  We also remove shoelaces and belts from the individuals in our custody and store it with their property because they pose similar risks.”

The same official said that personal property is stored in numbered bags and that migrants can reclaim the property when they leave a CBP facility.

But David Hill, a volunteer for Arizona based non-profit group No More Deaths, which has run its Property Recovery Assistance Project for migrants since 2008, told AFP in a July 3, 2019 email: “Among deportees, it is extremely common for them to report that they didn't get their stuff back.”

According to Hill, who volunteers in Nogales, Arizona, retrieving personal property for deportees: “We fully inventory each bag of property we receive. As far as rosaries go, they're common enough. So are things like scapulars and prayer cards, and all kinds of religious and nonreligious personal items. I searched my database of inventories and got 183 hits for ‘rosary.’”

The non-partisan American Immigration Council also published this report on December 21, 2016 about the mishandling of migrants’ belongings.

The report states that after the introduction of CBP’s TEDS policy in 2015, there was little change in the percentage of migrants who reported that not all their possessions had been returned after their release.

The report states in part: “Specifically, before TEDS went into effect in October 2015, 41.5 percent of respondents whose belongings had been retained upon detention reported that not all of their belongings were returned. After TEDS, this proportion was almost identical at 41 percent.”

This video shows an alleged kidnapping in Indonesia, not Malaysia