Published on Friday 23 August 2019 at 12:00
A photo is circulating in multiple Twitter and Weibo posts which claim it shows Simon Cheng, a staffer at the UK consulate in Hong Kong, with a sex worker in China. The claim is false; the image had circulated online long before Cheng was detained in the mainland in August 2019.
Read more 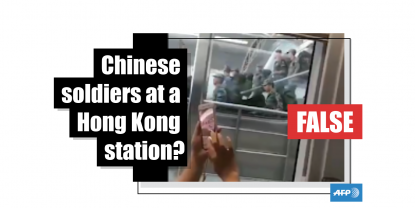 The video shows soldiers at a railway station in Guangzhou, China -- not Hong Kong

Published on Thursday 22 August 2019 at 11:00
A video showing uniformed soldiers at a train station has been viewed more than one million times in Facebook, Twitter and YouTube posts that claim it shows Chinese troops entering Hong Kong. The claim is false; the video was actually filmed at a railway station in the southern Chinese city of Guangzhou.
Read more 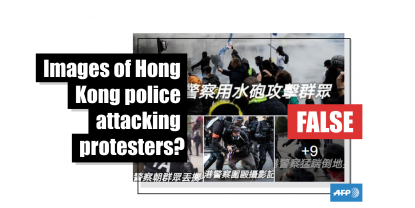 These pictures are from protests in France and Spain, not recent demonstrations in Hong Kong

Published on Wednesday 21 August 2019 at 10:30
A series of 12 images have been shared hundreds of times in Facebook posts that claim they show police officers attacking protesters in Hong Kong. The claim is false; all the images are from protests in Europe; nearly all were taken at “yellow vest” rallies in France.
Read more 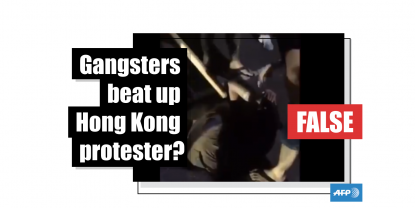 Published on Friday 16 August 2019 at 09:45
A video has been viewed hundreds of thousands of times in Facebook, YouTube and Twitter posts that claim it shows "gangsters hired by China" beating a Hong Kong protester. The claim is false; the conversation heard in the clip is about debts allegedly owed by the man being attacked; the same footage was published by media in Taiwan in 2018; Taiwanese police told AFP that the video showed an assault in Taichung, Taiwan, which was connected to a debt issue.
Read more 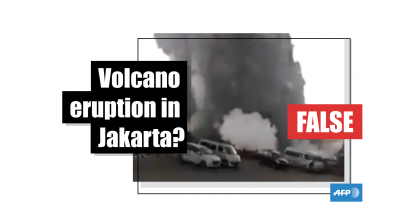 Published on Monday 12 August 2019 at 10:20
A video has been viewed tens of thousands of times in multiple Facebook posts published in July 2019 which claim it shows a volcano erupting in Jakarta -- Indonesia’s capital. The claim is false; the clip shows a volcano eruption close to the Indonesian city of Bandung, on July 26.
Read more