A video has been viewed thousands of times in multiple Facebook, Twitter, and YouTube posts that claim it shows a massive fire in a village in central Myanmar. The posts surfaced online after reports circulated that the village was burned down by the Myanmar military on June 15, 2021. The claim is false: this video in fact shows the blaze that destroyed a refugee camp in Thailand in 2013.

The post’s Burmese-language caption translates to English in part: “The video shows the fire in Kinma village, Pauk Township. There is a lot more violence these days. In the past, there were arrests and killings in the cities during protests. Now, they are going to the villages which are revolting against them. They are doing whatever they want. Now they are even burning the whole village”. 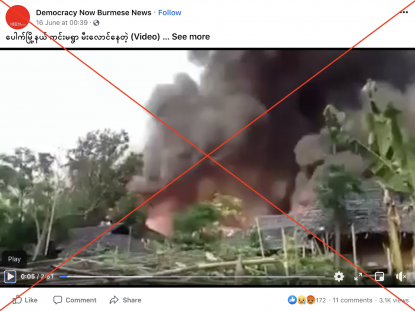 Kinma, a small village located in Pauk township in central Myanmar, was razed almost entirely to the ground in mid-June.

Villagers told AFP junta forces were to blame for its near-destruction, while the military said “terrorists” and windy weather were responsible. AFP reported on the story here.

The military denied the reports and said in a press release published by state-owned media, Global New Light of Myanmar, that the fire was started by members of a civilian-led rebel group.

It was uploaded by the Border Consortium, a non-profit organisation working with refugees.

According to the description, the video shows a fire in Mae Surin refugee camp in Thailand’s Mae Hong Son Province.

According to UN refugee agency, the majority of refugees at the camp were from the Karen and Karenni ethnic groups originating in Myanmar.

Below are three screenshot comparisons of the misleading post (L) and the original video (R): 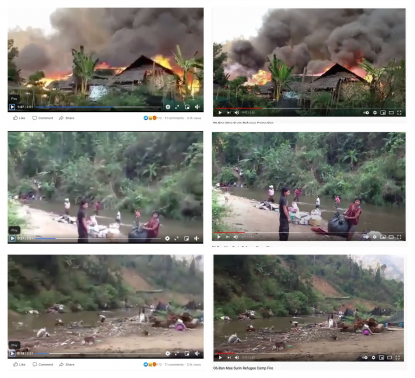