Skip to main content
Pigs are seen at a swine farm in Rio Negro, outkirts of Medellin, Colombia on April 28, 2009. (AFP / Raul Arboleda)

Facebook posts shared tens of thousands of times warn people in Thailand against eating beef or pork because a recent outbreak of lumpy skin disease, a viral infection in cattle, has spread to pigs. The claim is false: the disease is not transmissible to pigs and there is no risk of humans becoming infected if they eat beef or pork, according to health experts.

The post shows various photographs of cows and pigs with lumps on their skin. 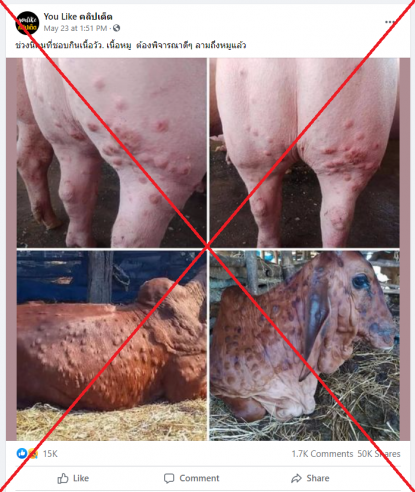 The posts surfaced online after a lumpy skin disease outbreak in Thailand, which infected thousands of cattle and aggrieved farmers already hit by the pandemic.

On June 11, 2021 the Bureau of Disease Control and Veterinary Services said it had recorded more than 51,222 cases of the disease across 47 provinces.

The same images have been shared alongside a similar claim on Facebook here, here, here and here.

The World Organisation for Animal Health states that Lumpy Skin Disease Virus (LSDV) “is highly host-specific and causes diseases only in cattle and water buffalo”.

“Lumpy skin is a disease that can only occur in cattle,” he told AFP. “Humans and pigs cannot contract the disease. As for concerns that the disease will affect consumers of beef, the lumpy skin disease cannot enter the muscle cells of cattle.

"Furthermore, we have a law to control the livestock entering slaughterhouses, which is the Meat Slaughter Control Act, which prohibits the transfer of sick livestock.”

He said the photos of pigs shared alongside the false claim on social media did not show lumpy skin disease.

“From observation, there are two possibilities: 1. It is an allergic reaction to bug bites, and 2. it can be swine pox, which is a disease prevalent in pigs,” Yotakon said.

Kachen Wongsathapornchai, regional manager for the Emergency Centre for Transboundary Animal Diseases, Food and Agriculture Organisation of the United Nations (FAO), also told AFP: “There is no evidence that LSD virus can cause disease in other types of animals apart from cattle and buffaloes.”

“Humans will not contract the disease from either direct contact or consumption of meat from LSD-infected animals”, he said on June 21, 2021.

AFP previously debunked a similar claim that people in Thailand died from the consumption of infected cow meat here.