A video of an Austrian politician purporting to show that a glass of Coca-Cola tested positive for Covid-19 in a rapid antigen test has been viewed thousands of times in multiple posts on Facebook, Instagram and Twitter. The posts suggest the video is evidence that the tests are unreliable at detecting Covid-19. The claim is misleading; experts told AFP the test carried out by the politician in the clip was not performed correctly. In response to the misleading claim, the manufacturer of the rapid antigen test said the same test actually returned a negative result for Coca-Cola when performed correctly.

The video was published in this Instagram post on December 12, 2020. It has been viewed more than 9,000 times.

The post’s caption reads: “An MP in Austria, demonstrated a glass of coke testing positive to Covid19, live in parliament. This is beyond farcical people, only you can stop it”. 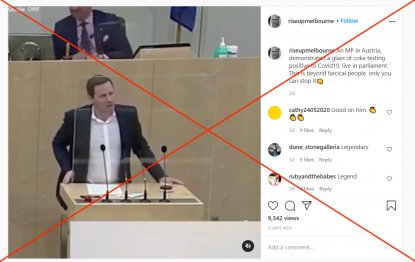 The video shows Michael Schnedlitz, member of the Freedom Party of Austria (FPÖ), applying Coca-Cola directly to a rapid antigen test in the Austrian National Council on December 10, 2020 in an effort to prove that the test is unreliable at detecting COVID-19.

Austria has been using rapid antigen tests as part of a mass testing drive for the novel coronavirus, as noted in this report by AFP.

A similar claim was shared in Facebook posts here and here, as well as on Twitter here.

Professor Peter Collignon, an infectious diseases physician and microbiologist at Canberra Hospital and the Australian National University, told AFP that conducting such a test incorrectly could yield invalid results.

“If you don’t use any test according to the instructions you will get many more erroneous results, either false positive or negatives,"  he said in an email on December 23, 2020. "So the Coca-Cola experiment doesn’t not surprise me re giving a false positive result. A lot of the more current rapid tests are very good with better than 90% sensitivity and specificity. Not as good as PCR testing but pretty good and rapid."

Collingnon went on to say that even if there was no reaction to the acid, Coca-Cola contains other chemicals that might change an indicator’s colour, producing false positives.

“Bottom line: use a test that has good performance as judged by FDA etc and follow the manufacturer’s instructions to the letter (and I bet none have used Coca-Cola in their instructions!)” he said.

In response to Schnedlitz’s misleading claim, Dialab, the manufacturer of the rapid antigen test, said the politician did not conduct the test correctly.

The company posted a Facebook video on December 12, 2020 of a rapid antigen test for Coca-Cola which returned a negative result.

“In a properly executed test, the sample is always swirled first in a liquid (buffer) that keeps the pH constant,” the accompanying post reads.

“Such tests should always be carried out by hospital staff or by being carried out by trained individuals to avoid such results and representations,” the post reads.