A tweet has been shared thousands of times in social media posts that claim the US Congress voted 49-46 to add the repeal of Section 230 — legislation which shields online platforms from liability for user-generated content — into the country’s annual defense bill in December 2020. The claim is misleading: the 49-46 vote was actually in the US Senate and approved Republican lawyer Nathan Simington joining the Federal Communications Commission on December 8, 2020; the US House of Representatives passed the annual defense bill for 2021 without including the alleged repeal of Section 230.

The claim was originally published here on Twitter on December 9, 2020, where it was shared hundreds of times. It was subsequently removed.

The post’s caption, written in simplified Chinese language, translates to English as: “The US Congress voted 49 to 46 to add the veto of Section 230 to the 2021 National Defense Authorization Act, which immediately became law after Trump signed it. Now, you can think about how to sue Twitter, Facebook, Google, YouTube, New Times, The Wall Street Journal, CNN, etc..” 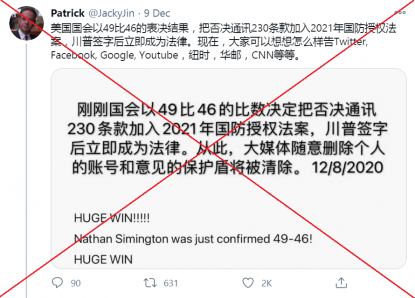 The tweet and the screenshots include an image which says in simplified Chinese: “Just now, Congress voted 49 to 46 to add a Section 230 veto to the 2021 National Defense Authorization Act, which immediately became law after Trump signed it....

Section 230 was included in the 1996 Communications Decency Act to protect online service providers from lawsuits based on user-generated content.

The legal immunity Section 230 provides has been attacked by US President Donald Trump, and he said in two December 2, 2020 tweets here and here that he would veto the NDAA, the annual defense policy bill, if it did not include a Section 230 repeal.

A keyword search found a 49-46 vote result actually happened when Republican lawyer Nathan Simington was approved by the US Senate to join the Federal Communications Commission for a term of five years from July 1, 2019.

That vote, on December 8, 2020,  was recorded on the official site of the US Senate here.