Skip to main content
A Pakistani vendor uses his smartphone as he waits for customers at his stall at a market in Islamabad on October 11, 2018. (AFP / Aamir Qureshi)

Footage of a US law enforcement official speaking at a podium has been viewed thousands of times in multiple Twitter and Facebook posts that claim it shows her announcing details of an Indian call centre fraud scheme that was exposed in December 2020. The claim, however, is misleading; the video in fact shows a US Department of Justice official talking about a different Indian call centre scam in 2016.

The video was published on Twitter here on December 12, 2020.

The woman seen in the video can be heard saying: “More than 15,000 victims, including many new immigrants to the United States and the elderly, were targeted by a complex fraud scheme involving a network of call centres originating in India.” 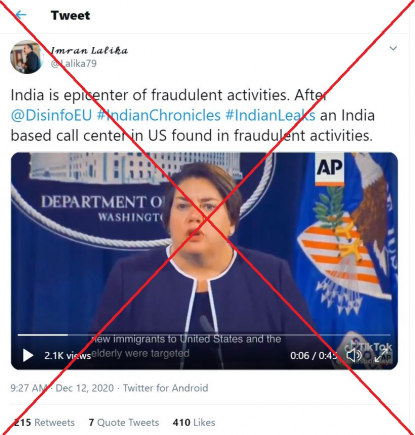 The post circulated just days after EU DisinfoLab, a Brussels-based non-governmental organisation, published the Indian Chronicles Report on December 9, 2020. It exposed a 15-year operation by an Indian group that targeted international organisations in an effort to promote Indian interests and undermine Pakistan.

The video was shared alongside a similar claim related to the Indian Chronicles Report on Twitter here and here and on Facebook here.

The footage was published by the Associated Press (AP) on YouTube here on November 1, 2016. The video description gives the video's date as October 26, 2016. AP’s logo can be seen in the top right-hand corner of the original YouTube video as well as in the video shared in the misleading posts.

The Department of Justice also released a statement detailing the case on October 27, 2016.

The press release states that the US government charged “a total of 61 individuals and entities for their alleged involvement in a transnational criminal organization that has victimized tens of thousands of persons in the United States through fraudulent schemes that have resulted in hundreds of millions of dollars in losses.”

The statement adds: “32 individuals and five call centers in India were charged for their alleged involvement.”