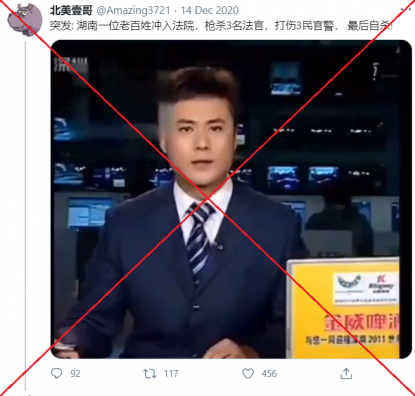 The video shows a Mandarin-speaking news anchor whose reporting translates to English as: “According to the Hunan Higher People's Court, at around 10 am yesterday, a serious shooting incident occurred at the Lingling District People's Court in Yongzhou city, Hunan province, killing three judges and injuring three police officers. The murderer Zhu Jun shot himself dead on the spot.”

A Mandarin voiceover later in the clip reports that: “According to preliminary investigation, the murderer Zhu Jun was a 46-year-old cash security guard in the Lingling branch of Yongzhou Post Office. He was divorced for many years and suffered from cancer. The day before the case, Zhu Jun had a direct conflict with his workplace management. Zhu Jun had filed a lawsuit at the Lingling District People's Court in 2006, but he was dissatisfied with the judgment.”

Lingling District is an area within Yongzhou, a city in China’s south central Hunan province.

The tweet’s simplified Chinese caption translates in English as: “Breaking: A citizen in Hunan rushed into the court, shot and killed 3 judges, wounded 3 police officers, and committed suicide!”

The video was also shared alongside similar claims in December 2020 on Twitter here and on YouTube here.

A keyword search found the video was published on Weibo here in 2016, several years before the misleading posts claim.

Further searches found that the shooting in fact occurred in 2010. The Hunan Higher People's Court published a detailed statement on the incident that corresponds with the reporting in the video news report here on June 1, 2010.

The statement’s simplified Chinese headline translates in English as: “Three judges killed in a shooting at Lingling district court in Hunan’s Yongzhou city.”

“At around 10 am on June 1, 2010, a serious shooting incident occurred in the Lingling District People's Court in Yongzhou city, Hunan province, killing three judges and injuring three police officers. The murderer Zhu Jun shot himself dead on the spot,” the statement reads.

“According to the preliminary investigation, the murderer Zhu Jun (also known as Zhu Xiaojun, male, 46 years old, cash security guard for the Lingling branch of Yongzhou Post Office) had a furious temper, had been divorced for many years, and also suffered from cancer and suicidal thoughts; he had long-term depression, thought that the management of Lingling Post Office Branch was unfair to him, and had a direct conflict with the management before the case; he filed a lawsuit at Lingling District People's Court in 2006, and although the murderer Zhu Jun won the case and the enforcement judgement was terminated, he was still dissatisfied.”

The shooting was also reported on in 2010 by Chinese state-owned newspapers Global Times here and People’s Daily here.