Skip to main content
Merck employees at the company’s building in Summit, New Jersey on October 2, 2013

An article shared on social media claims US pharmaceutical company Merck discontinued Covid-19 vaccine research and said recovering from the virus would be more effective. This is inaccurate; the company said it scrapped its vaccine candidates because they did not offer the same level of protection as other shots and produced an immune response “inferior” to that of natural infection, while medical experts said immunization is the safer option.

“Merck Scraps COVID Vaccines; Says It’s More Effective To Get The Virus And Recover,” reads the headline of an article that has been shared more than 23,000 times on Facebook since January 26, 2021, according to the social media monitoring tool CrowdTangle. 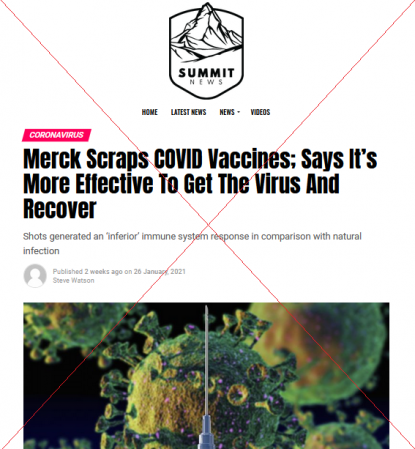 Screenshot of an article on summit.news on February 8, 2021

The claim can also be found on Twitter and in French, Spanish and Portuguese.

The article is based on a January 25, 2021 Merck statement, which announced it was discontinuing development of its Covid-19 vaccine candidates following phase 1 clinical trials. It said: “In these studies, both V590 and V591 were generally well tolerated, but the immune responses were inferior to those seen following natural infection and those reported for other SARS-CoV-2/COVID-19 vaccines.”

AFP wrote at the time that the vaccine candidates -- a joint effort of Merck and France’s Pasteur Institute -- were dropped “after clinical trial results proved disappointing.” The proposed shot was based on an existing measles vaccine.

The Pasteur Institute also published a statement, which said that “the immune responses induced by the vaccine were inferior to both those observed in individuals who had recovered from natural infection and those observed with the vaccines currently authorized for SARS-CoV-2/COVID-19.”

Merck said it would continue working on “two investigational therapeutic candidates,” including an oral anti-viral agent, while the Pasteur Institute emphasized it was still working “on two other vaccine candidates based on different methodologies.”

The Summit News article does not mention that Pfizer-BioNTech and Moderna vaccines have been approved for emergency use in the US and Canada. After large phase 3 clinical trials, these vaccines were shown to be safe and conferred immunity to the virus 90-95 percent of the time and made Merck’s vaccine far less competitive in comparison. 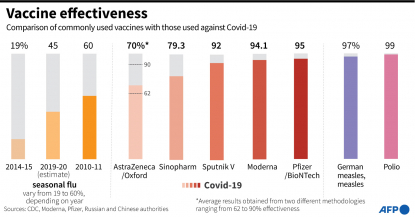 A Merck spokesman told AFP in an email that the article is “false.”

He said: “We are encouraged by the recent progress of other authorized and late-stage Covid-19 vaccine candidates that have set a high bar for efficacy and safety. This is good news for our industry and for society.”

Contrary to the article’s claim, the Merck and Pasteur statements made no mention that vaccines generally should be abandoned in favor of immunity from natural exposure to the virus.

Instead, experts agreed that Merck had chosen not to move forward because its vaccine looked set to fall short of other companies’ offers.

The Summit News article is “a distortion of the decision by Merck,” according to Julian Leibowitz, a professor at Texas A&M University’s College of Medicine.

“Merck’s decision was largely driven by commercial considerations. They were considerably behind at least seven other vaccine makers who had either completed or almost completed large phase III trials and had received an emergency use authorization in one country or another,” he added in an email to AFP.

Amine A. Kamen, a professor at the McGill University Department of Bioengineering and Canada Research Chair in Bioprocessing of Viral Vaccines, agreed.

“The trial was stopped because the data were not showing sufficient protection (as compared to other candidate vaccines),” he said in an email.

“This is the first time that measles has been used as (a) vector to deliver and express an antigen for vaccination and failure is part of trying something new, unfortunately,” he added.

Scott Halperin, professor at the Division of Infectious Diseases at Dalhousie University, emphasized that Merck’s decision doesn’t mean that Covid-19 vaccines are less effective than recovering from the disease, rather “it means that their candidate did not achieve their expectation to support further development.”

As for natural infection, it does offer some immunity against coronavirus, “although we don’t know how long that immunity will last,” Smith said.

“The problem with natural immunity is that it comes with lots of complications! We can’t predict who will have a mild case of Covid and who will end up in the hospital or even die… So while we don’t know yet which will give longer-lasting immunity, we do know that vaccine-acquired immunity will be safer than naturally-acquired immunity,” she said.