An image purportedly showing former US First Lady and Secretary of State Hillary Clinton wearing an electronic ankle monitor has been shared repeatedly on Facebook in February 2021. The posts claim the photo is evidence that Clinton "may have been arrested". The image, however, has been doctored: the original photo shows Clinton walking through New York in 2019 without an ankle monitor. As of February 9, 2021, there were no credible reports that Clinton had been arrested.

The image was published on Facebook here on February 3, 2021. 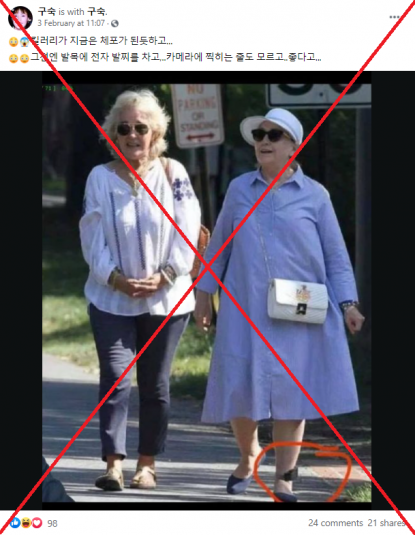 The post's Korean-language caption translates to English as: “Hillary might be arrested by now.

“She seems to be enjoying it, but had no idea that her picture was taken while wearing an ankle monitor.”

The image was also shared alongside a similar claim on Facebook here, here and here.

A reverse image search found the original photo was published by MailOnline, the website for UK tabloid Daily Mail, here on August 27, 2019. The photo shows Clinton walking without an ankle monitor.

The original photo, which is credited to splashnews.com, is captioned: “Looking relaxed: Hillary wore sensible navy flats to walk around Amagansett Square, a shopping and dining area in Amagansett, New York.”

Below is a screenshot comparison of the doctored image shared on Facebook (L) and the original photo published by MailOnline (R): 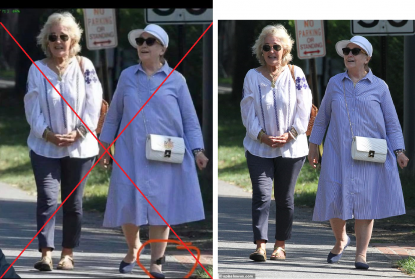 The screenshot comparison between the image in the misleading Facebook post (L) and the photo published by Daily Mail (R).

As of February 9, 2021, there were no credible media reports that Clinton had been arrested.