This video predates the West Bengal election in 2021

A video has been viewed tens of thousands of times in multiple Twitter posts that claim it shows voter fraud during the 2021 elections in the eastern Indian state of West Bengal. The claim is false: the video has circulated online in unrelated posts since at least May 2019.

The video purports to show two voters separately receiving assistance from another woman as they log their votes in an electronic polling machine.

It is captioned: “Got from WA. This is how TMC has been doing rigging.”

“WA” refers to WhatsApp, the mobile messaging application used by hundreds of millions of people in India.

“TMC” refers to the All India Trinamool Congress, the ruling party in West Bengal.

The misleading post circulated during ongoing polls in the eastern Indian state, where TMC looks to fend off a challenge from Prime Minister Narendra Modi's Bharatiya Janata Party. 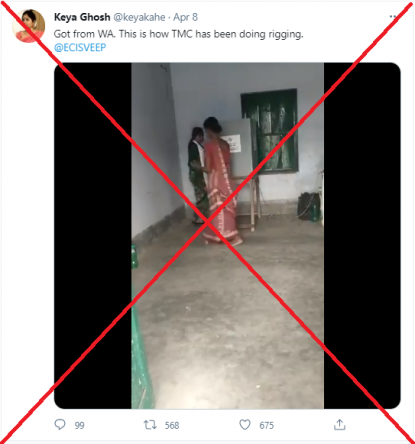 A screenshot of the misleading post, taken on March 13, 2021

An identical video was also shared alongside a similar claim here, here, here and here on Twitter.

The video was embedded in a May 16, 2019 report by News Central, a local media organisation in India.

The report reads in part: “A video shared by a senior journalist on Twitter shows how a woman at a polling station obstructs other voters from casting their vote.

“In the 0.28-second video clip, it is clearly visible that the woman in question is violating the poll process. A polling official can also be seen sitting at the booth. However, he makes no attempt to stop her.

“The exact source of the video and the place where this took place have not been ascertained yet. However, it has been suggested that it is from rural Bengal.” 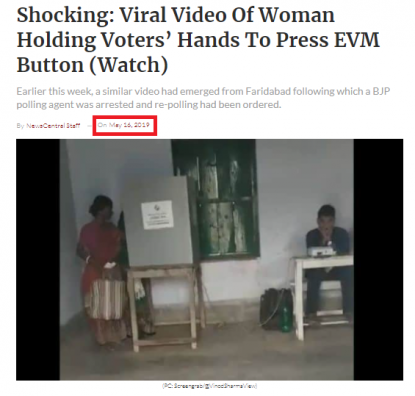 A screenshot of the news report, with the date highlighted in red

The News Central report credits the video to journalist Vinod Sharma, who posted the same video on Twitter on May 15, 2019.

Further keyword searches found several social media users have also uploaded the video since 2019 in posts unrelated to the ongoing West Bengal polls here and here on Twitter; and here on Facebook.