This video of an orangutan has circulated in reports since November 2019, months before the novel coronavirus pandemic

A video of an orangutan washing its hands has been viewed millions of times in Facebook, Twitter and YouTube posts which claim the animal was imitating its zookeepers during the novel coronavirus pandemic. The claim is false; the video of the orangutan has circulated in reports since at least November 2019, weeks before COVID-19 was first detected in the Chinese city of Wuhan in December 2019.

The video has been viewed more than six million times since it was posted to Twitter here on April 2.

The caption of the 16-second clip states: “Sandra the orangutang started washing her hands because she saw all the zookeepers doing it repeatedly during the COVID-19 crisis.”

COVID-19 has killed more than 62,000 people and infected over 1.1 million others worldwide as of April 6, according to the World Health Organization. 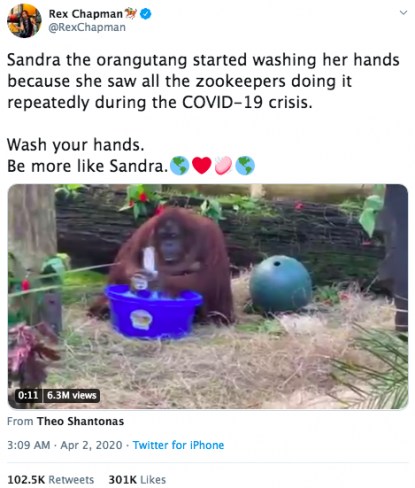 A reverse Google image search found a longer version of the video published here on Facebook on November 13, 2019, weeks before the novel coronavirus outbreak.

“Sandra has daily pools of water and really likes to wash things -- her toys, her surroundings, and her hands! Sandra loves to clean up! #orangutancaringweek #cleanhands #bubblesarebest”.

Below is a screenshot of the video in the misleading posts (L) and the Center for Great Apes video (R):

The footage was filmed shortly after the 34-year-old orangutan arrived at the centre in November 2019, according to the sanctuary’s website.

Echoing advice from health agencies on proper hand washing techniques during the COVID-19 pandemic, the Center for Great Apes reposted the video of Sandra here on Facebook on March 15 alongside the caption: “She definitely scrubbed her hands for longer than 20 seconds, good job Sandra! #washyourhands”.