A video has been viewed thousands of times on Facebook, Twitter, Instagram and YouTube in March 2020 alongside a claim that it shows police in Spain detaining people during a lockdown due to the coronavirus pandemic. The claim is false; the video has circulated in reports about an anti-government protest in Azerbaijan in October 2019. 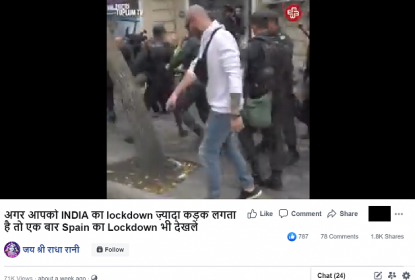 The post’s Hindi caption translates to English as: “If you think that COVID-19 lockdown in India is very stringent then see the situation of lockdown in Spain.”

On March 24, 2020, Indian Prime Minister Narendra Modi announced a 21-day lockdown to combat the spread of the novel coronavirus, which causes the disease COVID-19.

The Spanish government imposed a near-total lockdown for the country in mid-March.

The claims are false; the video has circulated in reports about an anti-government protest in the Azerbaijani capital of Baku.

A keyword search found the original video published here on October 21, 2019 on the YouTube channel of a Berlin-based Azerbaijani news network Meydan TV.

The video’s Azerbaijani-language title translates to English as: “Images of police violence and insults to protesters”.

The video's caption translates to English as: “Authorities and YAP officials claim that police did not use violence during the October 19 rally. We have collected images of violence for you during the action. Follow, decide for yourself. Share it so that it reaches the official bodies, maybe they took measures.”

YAP is the name of the ruling political party in Azerbaijan.

Below is a screenshot comparison of keyframes extracted from the video in the misleading posts (L) and the Maydan TV video (R): 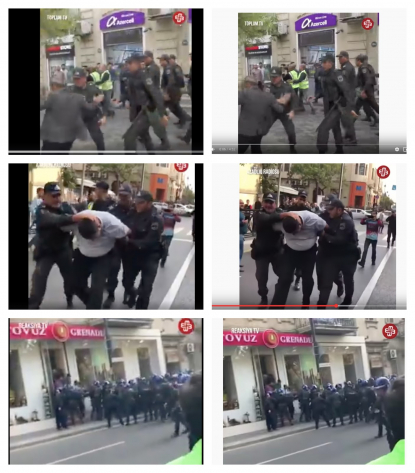 Protesters in Azerbaijan were detained after several demonstrations in late 2019. The rallies were staged over issues including pay and political freedoms. US-based campaign group Human Rights Watch subsequently issued this statement condemning instances of police violence at the protests.