Skip to main content
A worker adjusts his face mask as a preventive measure against the Covid-19 coronavirus inside an elevator with a restriction notice in Bangkok on January 18, 2021. (Romeo GACAD / AFP)

A video has been viewed thousands of times in multiple Facebook posts alongside a claim it shows the dean of a Thai hospital giving Covid-19 prevention tips, including the importance of boosting your immune system. The claim is misleading: the woman in the misleading video is not a Thai hospital dean. Health experts told AFP that having a healthy immune system does not entirely preclude the possibility that someone will develop Covid-19 symptoms.

The video was published here on Facebook on January 9, 2021.

The video’s Thai-language caption translates to English as: “The Dean of Faculty of Medicine, Siriraj Hospital gives a method to kill #Covid-19 virus on your own. Let’s listen to the doctor so that you wouldn’t have to worry much about Covid-19. Please help me share this video.”

Siriraj Hospital is Thailand’s biggest and oldest hospital. It is located in the west of Bangkok.

The five-minute video shows a woman talking in Thai.

The claim circulated shortly after a new cluster of Covid-19 infections was detected at a seafood market in Thailand's central Samut Sakhon province, AFP reported here.

The video was also shared here, here, and here on Facebook alongside a similar claim.

The claim is misleading: the woman in the footage is not the dean of Siriraj Hospital.

A keyword search found out Professor Prasit Watanapa is the dean of Siriraj Hospital as of January 2021, not the woman in the misleading posts.

The photo of Professor Prasit on the hospital's website does not match the image of the woman speaking in the footage.

Below is a screenshot comparison of the misleading video (L) and Professor Prasit (R): 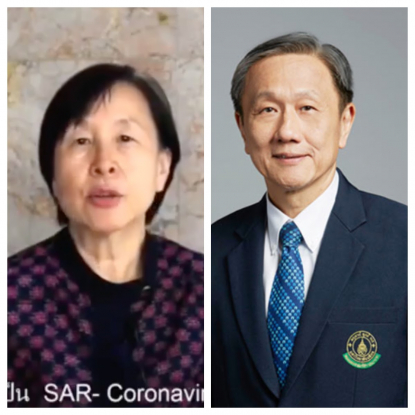 Screenshot comparison of the woman in the misleading Facebook (L) and the Siriraj Hospital’s dean, taken on January 18, 2021

A reverse image search on Google found the woman in the misleading video corresponds with the woman seen in this video published on the official YouTube channel of Bangkok Health Clinic on April 22, 2020.

The Thai-language video’s caption translates to English as: “Boost your immunity to protect from Covid-19 by Assoc. Prof. Lamduan Wongsawasdi from Bangkok Health Clinic."

The first 47-second part of the original video, which features Prof. Lamduan’s name, has been cut off in the video in the misleading posts.

Below is a screenshot comparison of the video in the misleading posts (L) and the Bangkok Health Clinic's video on YouTube (R): 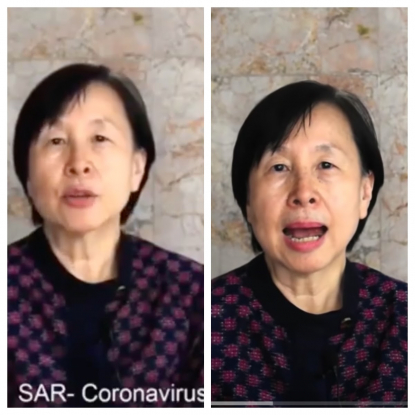 Assoc. Prof. Lamduan Wongsawasdi can be seen in other videos uploaded by the Bangkok Health Clinic YouTube channel, including here, here, and here.

Health experts told AFP it remains unclear whether someone with a strong immune system will not develop Covid-19 symptoms if they are infected by the virus.

Dr. Thira Woratanarat, an associate professor at the Department of Preventive and Social Medicine at Chulalongkorn University told AFP: “Nothing is 100% sure and guaranteed. It is possible that those in high risk groups can have no or mild symptoms, but they are likely to have a higher risk of severe symptoms.”

Dr. Thira said that those in high risk groups include: old people; those who have existing symptoms such as obesity, diabetes and high blood pressure; and those who have chronic diseases such as cancer as they take a medicine that lower the immunity level.

“However, those who are healthy can develop severe symptoms too depending on many factors such as how he/she was infected”, " he told AFP by phone on January 18, 2021.

Dr. Pokrath Hansasuta, an assistant professor of virology at Thailand’s Chulalongkorn University, told AFP by phone on January 18, 2021, that although those who have poor immunity have a higher risk of becoming ill, it is not guaranteed that they will experience severe Covid-19 symptoms.

“Those who have bad immunity such as those who take immunosuppressive drugs do have risks in [developing symptoms or death from Covid-19]. Those who are young and healthy are able to develop severe symptoms too.

"It is still unknown why, but it might be because of genetics. A lot of things still remain unclear."