Multiple Facebook posts shared thousands of times purport to show two comparison shots of a mural in Sri Lanka alongside a claim that it shows the painting has deteriorated. The claim is misleading: the photos do not show the same mural. Photos captured of the first mural shows the painting remains intact.

This Facebook post was published on January 5, 2021. It has been shared more than 5,000 times. It features a comparison of two images that are titled "Then" and "Now".

The "Now" image shows an illustration of a grey elephant on a wall covered by overhanging bushes. 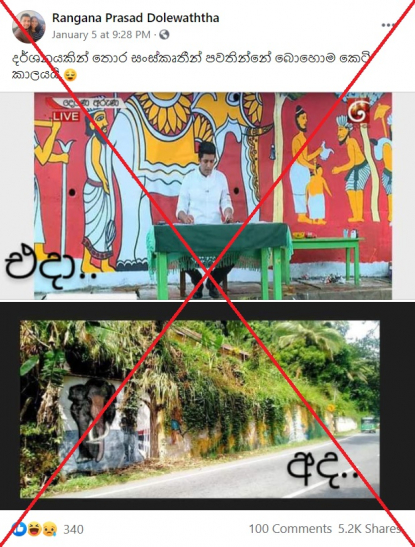 The post's Sinhala-language caption translates to English as: “Trends without a vision last only for a very short while”.

One Facebook user's comment translates to English as: "What needs to be done now is to clear the growth and clean the area and the painting, instead of fussing about it on Facebook."

Another wrote: "These were done for the trend then, but not a dog [significant person] to talk about it when it deteriorates".

The photo comparison was shared in several other Facebook posts, including here, here, here and here, alongside a similar claim.

The claim is misleading: recent images of the wall featured in the "Then" post show the artwork remains intact.

The first image in the Facebook posts is a screenshot of Sri Lankan TV channel Derana’s morning programme aired on December 4, 2019.

In the report, television show host Chatura Alwis explains that the mural was painted on a wall at Kandy Vidyartha College in central Sri Lanka.

The wall art on Kandy Vidyartha College walls were featured in the Derana TV programme following a wall art trend that was sparked in 2019 December. Young Sri Lankans were encouraged to create street art across Sri Lanka in a bid to turn urban spaces into works of art.

In response to a query from AFP, provincial journalist Kamal Suraweera said the "now" image does not show the wall at Kandy Vidyartha College.

“The wall art painted along the Vidyartha school wall remains intact,” he told AFP during a phone conversation on January 11, 2021.

Suraweera shared a series of images of the Kandy Vidyartha College wall with AFP, which he captured on January 14, 2021.

Below is a screenshot comparison of the "Then" image (L) and the same wall on January 14 2021 (R), with similar features highlighted in yellow by AFP:

Screenshot comparison of the ‘Then’ image (L) and the backdrop now (R) - similarities have been highlighted in yellow:

Below are some additional images of the school wall art taken by Suraweera: 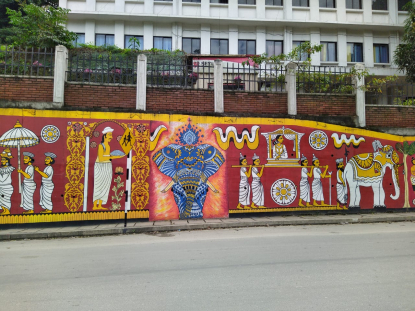 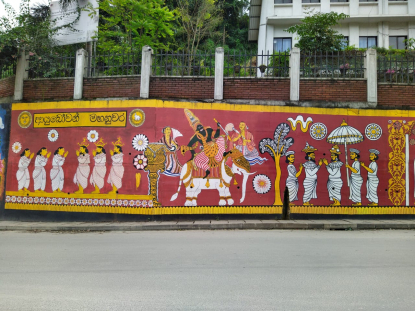 AFP could not locate the origin of the second photo in the misleading posts.