This video has circulated online since at least 2017

A video has been shared thousands of times on Facebook in August and September 2020 alongside a claim that it shows a train loaded with military equipment heading towards China’s southeastern Fujian province for an “attack” on Taiwan. The claim is misleading; this video has circulated online since at least 2017.

The 47-second footage shows what appear to be military vehicles travelling on railway tracks. 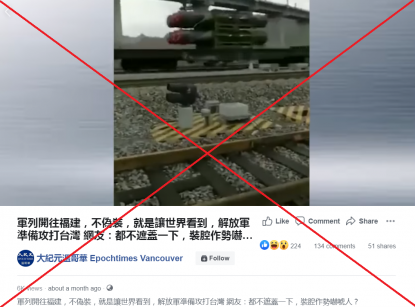 Part of the post's traditional Chinese-language caption translates to English as: “Military train heading to Fujian in plain sight so the world can witness how the People's Liberation Army is preparing to attack Taiwan."

Fujian is a province in southeast China, close to Taiwan.

Tensions between China and Taiwan flared up once again in August 2020 when a Czech delegation visited Taipei in a second high-profile visit to the island in a month, AFP reported here.

The video was also published on Facebook here, here, here and here alongside a similar claim in August and September 2020.

A reverse image search using keyframes extracted from the video in the misleading post found a longer version of the footage published here on YouTube on August 14, 2017.

Below is a screenshot comparison between the video in the misleading post (L) and the 2017 YouTube video (R): 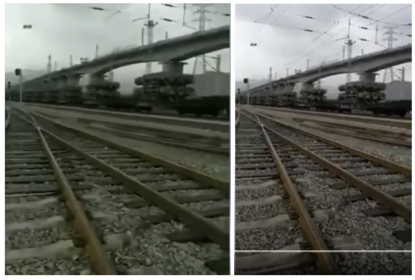