A photo purporting to show Philippine politicians Sarah Elago and Satur Ocampo donning head scarves with a hammer-and-sickle print has been shared hundreds of times in multiple Facebook and Twitter posts. The claim is false: the photo has been digitally altered from an original that does not contain the communist symbol.

The photo has been shared more than 400 times after being posted on Facebook here September 14, 2020. 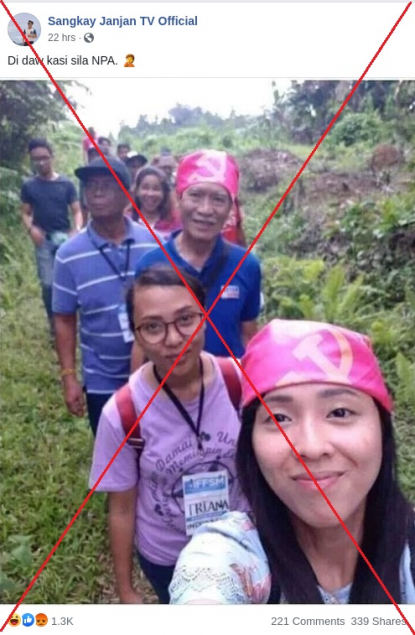 A screenshot of the misleading post, taken on September 15, 2020

The post’s caption states: "But they are not NPA."

“NPA” is the acronym for New People’s Army, the armed wing of the Communist Party of the Philippines.

However, the claim is false. The photo has been digitally altered to include the hammer and sickle symbol. 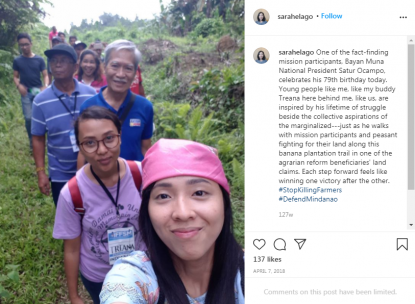 In the original photo, Elago can be seen wearing a plain head wrap, and Ocampo not wearing any at all.

Below is a screenshot comparison showing the doctored photo in the misleading posts (L) and the Instagram photo from Elago (R): 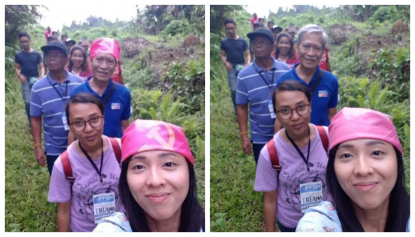 Elago also shared a comparison between her original photo and the doctored image in this June 15, 2020, Twitter post, adding that she would report the incident to the Philippine National Bureau of Investigation.