A video has been viewed tens of thousands of times in multiple Facebook posts which claim it shows a man wiping his sweat on the buttons of a lift in a residential block in Hong Kong. The claim is false; the footage has circulated in media reports about an incident in Thailand.

The 15-second video appears to be security camera footage with a timestamp which shows 5:23am on March 20, 2020. It shows a man appearing to put his hands inside his shorts before pressing the buttons in the lift. 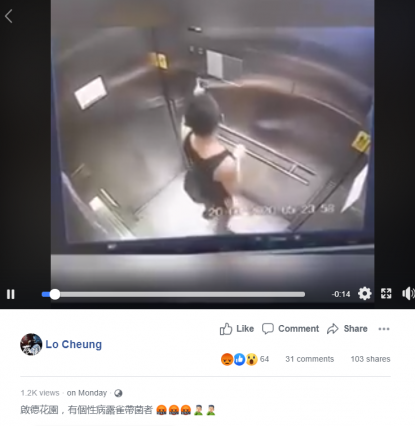 Kai Tak Garden is a residential housing complex located in the Hong Kong district of Kowloon.

The video was shared as Hong Kong continued to battle the spread of the novel coronavirus, COVID-19, as reported here by AFP.

The video has also been shared here, here and here on Facebook, alongside a similar claim.

The report reads in part: “A 32-year-old Thai man in Bangkok has been arrested after being captured on CCTV camera deliberately contaminating an elevator with his saliva and sweat. Bangkok Mass Transit System (BTS) staff told reporters the incident was captured on CCTV at 5:23am Friday.”

Below is a screenshot of the article published by The Thaiger: 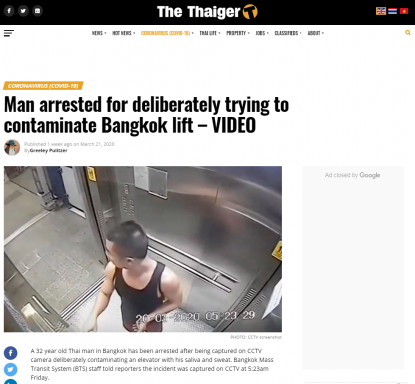 Screenshot of The Thaiger article

The incident was also reported by Thai newspapers bangkokbiznews here and Kom Chad Luek here, as well as the US news website International Business Times here.