A claim has been shared thousands of times in multiple posts on Facebook and Twitter that an emergency decree issued in Thailand due to the novel coronavirus pandemic included a strict curfew. The claim is false; the emergency decree declared on March 25, 2020 by Thailand’s prime minister did not include a curfew.

Part of the post’s Thai-language text graphic translates to English as:
“Emergency Decree Announcement, don’t panic, please follow these guidelines:
*Don’t leave the house between 8pm-5am
*Between 5am-8pm, can’t travel across provinces except for medical staff” Prime Minister Prayuth Chan-o-cha’s announcement on March 25, 2020, filmed by national broadcaster ThaiPBS, did not include a curfew.

The full decree, seen here on the official website of the Royal Gazette, did not mention a nationwide curfew. The decree did, however, issue 16 directives, including closing points of entry into the kingdom and prohibiting the hoarding of goods. The decree went into effect on March 26, 2020.

The Thai government also released an official statement here clarifying that no curfew was imposed under the emergency decree.

“The government has explained the details and rules of the Emergency Decree on Government Administration from March 26 - April 30, 2020. No curfews have been announced,” part of the statement reads in English.

Below is a screenshot of the government’s release: 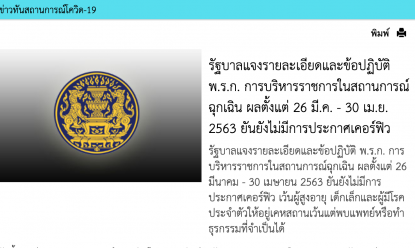