These images show vegetables being donated in Sri Lanka in 2019, months before the COVID-19 pandemic

Seven photos have been shared repeatedly in multiple posts on Facebook and Twitter, alongside a claim that they show vegetables donated to disadvantaged people during a curfew prompted by the novel coronavirus pandemic in Sri Lanka. The photos have been shared in a misleading context; they actually show vegetables being donated at an event in southern Sri Lanka in August 2019, more than eight months before the curfew was implemented.

The images were published on Facebook here on March 27, 2020.

The post’s Sinhala-language caption translates as: “While people in other ‘developed’ countries suffer with empty shelves this is in our country. Tissamaharama vegetable dansala.”

The post makes reference to Tissamaharama, a small town in southern Sri Lanka, and a dansala, which are donation events organised during Buddhist lunar holidays known as Poya days. 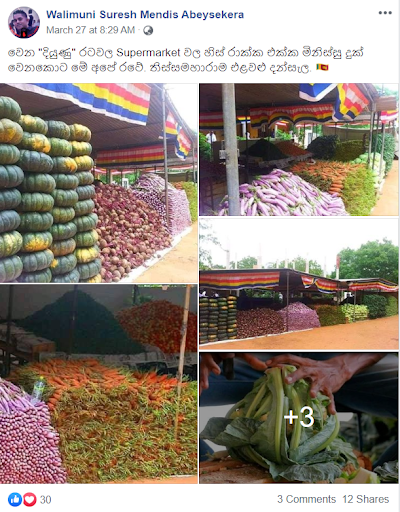 On March 20, 2020, Sri Lanka announced that regional curfews imposed to curb the spread of the coronavirus would be enacted nationwide. The since-extended curfew caused shortages of essential goods and produce.

A similar claim was made about the same photos on Facebook here, here, here and here, and on Twitter here.

A reverse image search found the photos were in fact published on Facebook here on August 14, 2019, months before the COVID-19 pandemic erupted.

According to the post, the photos show a dansala that was organized at a local temple called Kande Viharaya in Tissamaharama.

The post's full Sinhala-language caption translates to English as: “A unique dansala… The vegetable dansala held at the Tissamaharama Kande Viharaya..”. 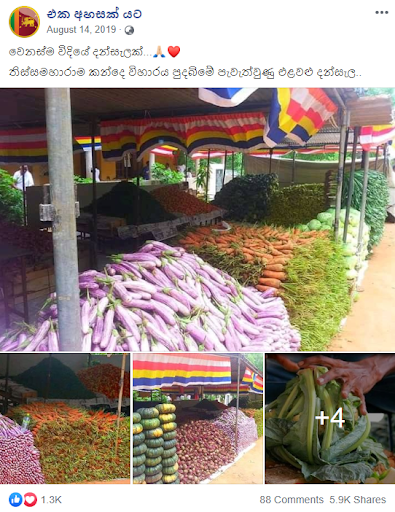 Below are screenshot comparisons of some of the images from the misleading posts (L) and the 2019 Facebook post (R): 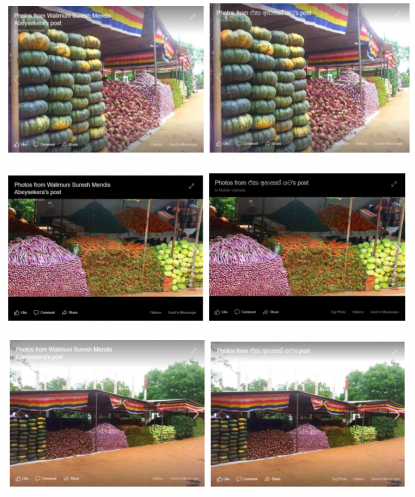 Kande Viharaya’s chief priest said the photos were taken during the 2019 Nikini poya, which is observed during the August full moon.

“This dansala was held last year during the Nikini poya. It was covered in various television stations as well,” the priest told AFP by phone on March 29, 2020.

A Tissamaharama correspondent for Sri Lankan television network Hiru TV, Amila Sampath, also said the images were from the danasala in August 2019.

“I covered this danasala held at the Kande Vihara temple last year on August 14 and I can confirm these images are being re-circulated on social media in an inaccurate context,” Sampath told AFP by phone on March 29, 2020.

“A businessman from Colombo transported the vegetables seen in the images from Bandarawela for the dansala,” he added.

The vegetable donation event was also featured here on Sri Lankan TV news channel Derana on August 14, 2019. It can be seen from the 30-minute nine-second mark to the 30-minute 22-second mark.