A clip has been viewed tens of thousands of times on Facebook and YouTube alongside a claim that an Indonesian church hymn was sung during a service at the Vatican in March 2021. The posts also claim the Vatican used woven coconut leaves as a mark of respect to the victims of a recent church bombing in Indonesia. The claims are false: the video has been edited to include an Indonesian church hymn. A Vatican priest told AFP the service used woven palm leaves, not coconut leaves. 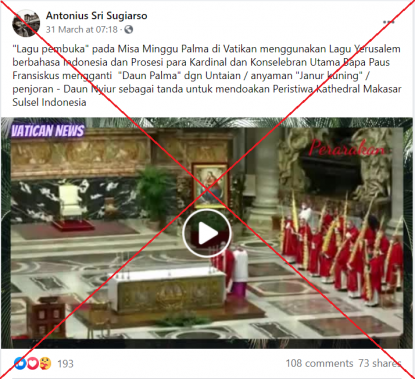 The post’s Indonesian-language caption translates to English as: “The ‘opening hymn’ at the Palm Sunday Mass at the Vatican used the Indonesian-language Jerusalem Song and the Procession of Cardinals and Principal Counselors Pope Francis replacing the ‘Palm Leaves’ with woven/braided ‘Yellow coconut leaves’ - the yellow coconut leaves used as a sign to pray for the Makassar Cathedral incident South Sulawesi Indonesia.”

The Indonesian hymn played in the video is titled “Yerusalem, Lihatlah Rajamu”, meaning “Jerusalem, Look at Your King”. It can be heard on YouTube here.

A suicide bomb hit a Catholic church in the Indonesian city of Makassar, South Sulawesi, on Palm Sunday on 28 March 2021, killing the two attackers and injuring 20 civilians, AFP reported.

The same footage has been watched more than 74,000 times alongside a similar claim on Facebook here, here, here and here; as well as on YouTube here.

A reverse image search on Google followed by keyword searches found the footage was taken from a video posted here on the official YouTube channel of Vatican News, the official communication channel of the Vatican on March 28, 2021.

The same scene shown in the misleading footage can be seen from the seven-minute, 30-second mark.

During the Palm Sunday Mass, Pope Francis said prayers in Italian for the victims of the church bombings. This can be seen at the 1:29:57 mark of the Vatican news video.

According to the Vatican’s translation, he said: “We pray for all the victims of violence in particular for those affected by the explosion this morning in eastern Indonesia, in the city of Makassar, in front of the Cathedral.”

Below is a screenshot comparison of the footage in the misleading post (L) and the original video (R): 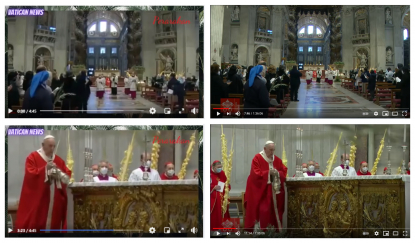 It was narrated by Father Markus Solo Kewuta, an Indonesian priest at the Pontifical Council for Interreligious Dialogue at the Vatican.

In the video, Father Markus says he asked the Vatican liturgy office for clarification about the service.

“The opening hymns during the mass were in Latin,” he says in Indonesian.

The yellow woven leaf used at the Mass shown in the video was parmureli, according to Father Markus.

Speaking to AFP by WhatsApp on 7 April 2021, he said: “The name is Parmureli, originally from Sanremo, Italy, [made] from the Date Palm tree.

“[It uses] the shoots. It’s a long tradition of Sanremo in northern Italy to present these beautiful decorations to the Pope for Palm Sunday since 1586 and have continued until now.”

Sanremo is a coastal city in northwestern Italy.

Woven date palm leaves were also used during the Palm Sunday Masses at the Vatican in 2020.

They can be seen in the first 23 seconds and at the 55:42 mark of this live broadcast video of by global Catholic TV network EWTN.