A video has been viewed more than two million times on Facebook and YouTube that claims it shows Philippine President Rodrigo Duterte commenting on a new dispute in the South China Sea. The posts claim the “breaking news” video shows Duterte commending a Filipino ship captain for standing up to the “Chinese Coast Guard”. The claim is false: the video in fact shows old news footage from 2019 about an incident involving a Chinese vessel; and Duterte’s spokesman at the time criticised the Filipino captain's actions.

The misleading video was shared by this Facebook page that has more than 160,000 followers. The clip has been viewed 2.2 million times since May 1, 2021. 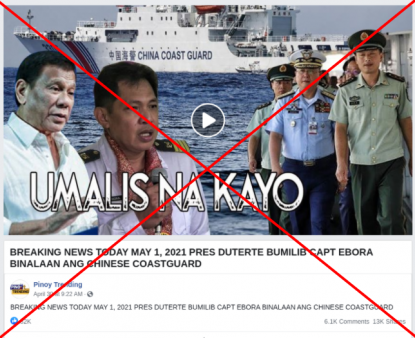 Captain Manolo Ebora is a Filipino seafarer. He made headlines in the Philippines in November 2019 after the Liberia-flagged crude oil tanker he was steering to China was ordered to change course by a Chinese vessel.

The video was viewed millions of times as tensions escalated between the Philippines and China in March 2021 after Chinese vessels were seen swarming disputed areas in the South China Sea, AFP reported.

A keyword search online found the video is not “breaking news” -- it is in fact a compilation of old news footage.

A photo showing the Philippine Coast Guard commandant visiting a Chinese coast guard vessel in January 2020 was used at the beginning of the video.

The video’s opening three minutes corresponds with this news report by CNN Philippines. It was first aired on November 4, 2019.

The report shows a recording of an exchange between Ebora with the Chinese vessel on September 30, 2019.

The remaining portion of the video corresponds with this footage from Philippine media Rappler. It shows Ebora making a speech about being honoured by his hometown for his “courage”.

Below are screenshot comparisons showing frames in the misleading video (L) and their corresponding sources (R): 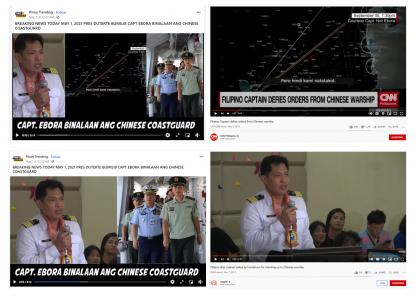 Michel Kristian Ablan, an undersecretary at the presidential communications office, told AFP on May 25, 2021 that government media had no reports on May 1, 2021 of President Duterte commenting on Captain Ebora’s actions.

The last report made by state media on the incident was published in November 2019. It quoted Salvador Panelo, President Duterte’s spokesman at the time, as he criticised Ebora’s remarks.

Panelo described the captain’s statement invoking “Philippines’ sovereignty” in that situation as “unnecessary”.