Skip to main content
US President Joe Biden (R) and South Korean President Moon Jae-in participate in a press conference in the East Room of the White House in Washington, DC on May 21, 2021. (AFP / Brendan Smialowski)

A claim has been shared online in South Korea that President Moon Jae-in was not received by flag-bearing honour guards when he arrived in the United States in May 2021 for a bilateral meeting with US President Joe Biden. But this claim is false: the posts only show photographs of Moon’s arrival that were taken from close range; multiple photographs taken from wider angles show Moon was received by honour guards waving the South Korean national flag when he landed.

The post shows a photo collage that purports to compare arrival photos of South Korean President Moon Jae-in and Japanese Prime Minister Yoshihide Suga during separate official trips to the US.

“Japanese Prime Minister Suga received a treatment like a national leader. But what is Moon Jae-in who wasn’t even presented with an honour guard holding the [South Korean national flag],” the post’s Korean-language caption reads in part. 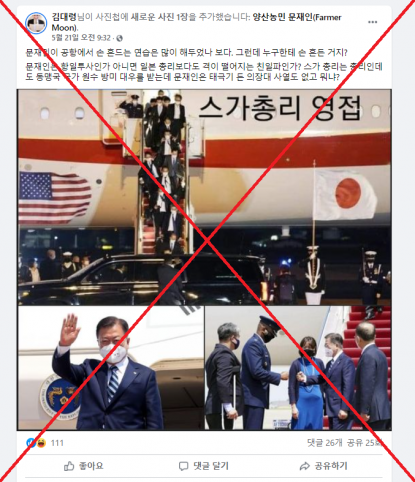 Suga’s photo at the top of the collage was taken from this Associated Press report published when the Japanese leader landed in the US for an official visit in April 2021.

Moon’s photos at the bottom of the collage were taken from images released here by his office when he arrived for a bilateral summit with US President Joe Biden in May 2021.

An identical photo collage has been shared alongside a similar claim here and here on Facebook; here and here on Naver Blog; and in this YouTube video that has been viewed over 500,000 times since its posting.

Keyword searches online found multiple photographs of Moon’s arrival which show he was in fact received by an honour guard holding the South Korean national flag.

A photograph taken from a wider angle was published here on May 20, 2021, by South Korean news agency Yonhap News showing the South Korean flag on the right. 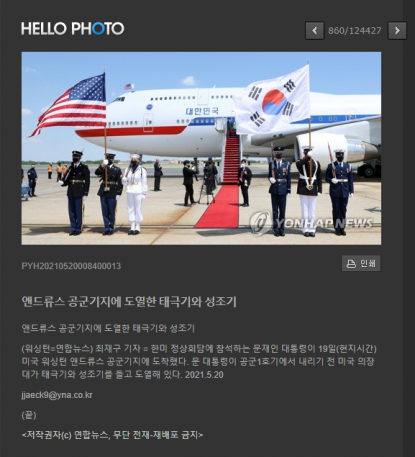 Screenshot of the photograph taken by Yonhap News Agency captured May 24, 2021.

Choi Jae-gu, the photographer who shot both images confirmed to AFP on May 25, 2021, that an honour guard holding the South Korean national flag was present during Moon’s arrival in the US.

“There was a small flag-bearing honour guard standing” at the airport when Moon arrived, he said.