Multiple Facebook posts have shared a video which they claim shows the aftermath of an attack carried out by Hamas against Israel amid deadly fighting in May 2021. The claim is false: the video has circulated online in unrelated reports since July 2020 about an explosion in an oil pipeline in Egypt.

The video's Bengali-language caption translates in part as: “Palestine is retaliating against Israel with tough measures: Hamas. There was an explosion in Israel that killed around 650 Jewish people.” 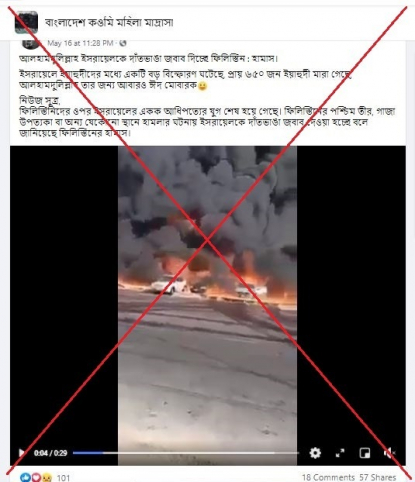 A screenshot of the misleading post taken on May 23, 2021

Hamas refers to the Palestinian Islamist group that rules Gaza.

Eleven days of Israeli air strikes and artillery fire on Gaza since May 10 killed 254 Palestinians, including 66 children as well as fighters, AFP reported.

Rocket and other fire from Gaza claimed 12 lives in Israel, including one child and an Arab-Israeli teenager, an Israeli soldier, one Indian national and two Thai workers.

The footage was also shared alongside a similar claim here, here and here on Facebook.

A longer version of the video published by Canadian news outlet Global News on July 15, 2020 shows a road sign near the fire spot with “Cairo Airport” written in Arabic and English. Google keyword searches found more reports on the fire after a leak from the Shuqair-Mostorod pipeline next to a busy highway in a Cairo suburb.

A report by Reuters news agency quoted the Egyptian ministry of petroleum saying that “a spark caused by passing cars ignited crude that was leaking from the pipe.”

Multiple keyword searches did not find credible reports about an explosion that killed around hundreds of Jewish people in Israel in May 2021, as the misleading posts claim.