This video actually shows an anti-government protest in Belarus

A video has been shared thousands of times in multiple posts on Facebook alongside a claim that it shows a rally against coronavirus restrictions in the British capital of London. The claim is false; the footage shows an anti-government protest in Belarus in August 2020. 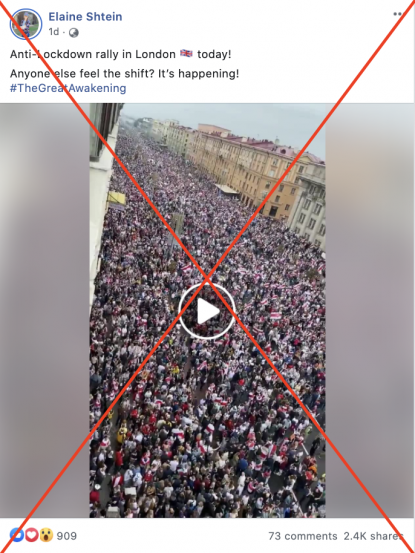 The post circulated online after thousands gathered in London’s Trafalgar Square on August 29 to protest against the country’s coronavirus restrictions. Here is a report by UK newspaper The Guardian about the mass rally.

A Google reverse image search of keyframes extracted from the video in the misleading post found the same clip in this tweet published by Paul Ronzheimer, a reporter for German newspaper BILD, on August 23, 2020.

Police: „Dear citizens, this is an unauthorized mass meeting...“ But people dont care, even the street which leads to the square is PACKED. pic.twitter.com/8W1MCElJZt

The tweet was part of a thread of videos from the Belarusian capital of Minsk. Anti-government protests in the city calling for an end to strongman Alexander Lukashenko's rule have entered a third week. Here is an AFP report on the ongoing unrest.

The location of the video in the misleading posts can be seen here on Google Street View. Exteriors of Minsk Central Post Office on Google match the building seen in the video.

Below is a screenshot comparison of the video in the misleading post (L) and a Google Street View panorama view of the Minsk Central Post Office (R):

Closer examination of the video also revealed that the people marching are holding white and red flags. Protesters opposed to Lukashenko have used a white and red flag in recent demonstrations -- the colours of the ex-Soviet country's emboldened opposition -- as a protest symbol against Lukashenko.