An image of two young children in distress was published in multiple Facebook posts that claim the photo was taken during a religious ritual in Jaffna, a city in northern Sri Lanka. The claim is misleading; the photo has circulated in reports about an incident that occurred at a temple in the southern Indian city of Chennai in 2018.

The photo was published on Facebook here on August 14, 2020.

The post’s Sinhala-language caption translates to English as: “An incident that occurred in Jaffna… Those who have an issue with young Buddhist monks being ordained seem to have lost their words over this…” 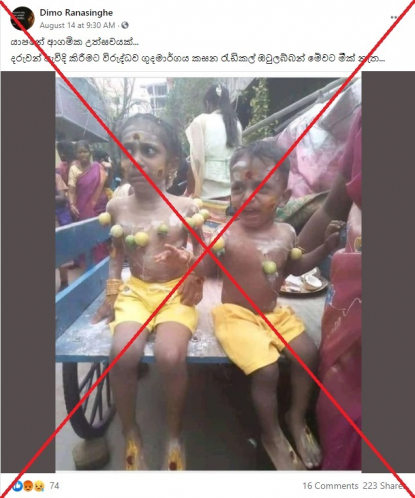 The photo was also published alongside a similar claim on Facebook here and here.

A reverse image search found that the photo was published here on a Tamil-language news website on August 6, 2018. The headline of the report states: “Action against parents for puncturing children”.

The report reads in part: “The Children's Rights Commission has said that action will be taken against the parents who stabbed the children in the name of religious rituals.”

The article adds that child protection services were made aware of the ceremony after the father of the children posted the photo on Facebook. The incident occurred at the Sri Mundakanniyamman temple in Chennai, according to the report.

The photo was also published here in another article about the same incident involving the children.