Two images of an Australian police force vehicle displaying a sticker that attacks Victoria state Premier Daniel Andrews have been shared hundreds of times in multiple Facebook posts. The posts claim the photos are evidence that “even Victoria police are sick of [Andrews]”. The claim is misleading; on October 20, 2020, a spokesperson for Victoria Police told AFP the department had launched an investigation into the incident and that the sticker had been placed on the vehicle by an “unknown person.”

The images purport to show a Victoria Police vehicle bearing a sticker which reads “Make Victoria Great Again” and a crossed out image of the state’s premier, Daniel Andrews.

The post’s caption reads: “It seems even Victoria police are sick of this prick”. 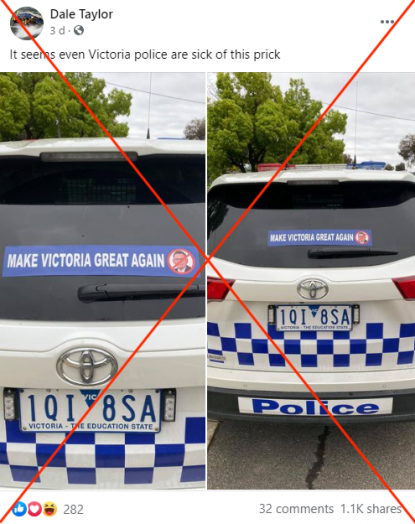 The images were also shared in these Facebook posts here, here and here with a similar claim.

In response to the misleading posts, a Victoria Police spokesperson told AFP on October 20 that the department was investigating the incident.

“Police are investigating after a sticker was fixed onto a Victoria Police vehicle in Yarra Glenn this morning (18 October),” the statement reads.

“The vehicle was parked and left unattended for a short time, during which an unknown person placed the sticker on the rear window of the vehicle.

“The marked police car was driven to Lilydale before the sticker was noticed and immediately removed.”