As the US government moved to approve a $2 trillion stimulus package to address the impact of the novel coronavirus outbreak, a short block of text outlining Canada’s alleged response to the outbreak flourished on social media. The claims about school closings and economic support are misleading; no province has officially closed schools through the end of the year, only individuals directly impacted by COVID-19 are eligible for financial aid, and mortgage relief is granted by banks on a case by case basis.

“All schools in Canada are closed for the rest of the school year, each family will receive $950 every two weeks for the next 15 weeks, banks were notify to suspend mortgage payments for at least 6 months, and student loans deferred.” 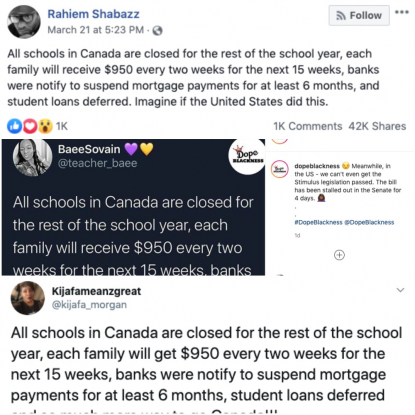 However, the claims made in the post are misleading.

Public school is currently suspended across Canada, but the length of  the school closures depends on each province and territory.

In the provinces of British Columbia, Alberta, Saskatchewan, Newfoundland-Labrador, schools are closed indefinitely, spokespeople for each province’s ministry of education told AFP.

New Brunswick schools are also closed indefinitely, according to a news release.

In the central province of Ontario, where classes were due to reopen on April 5 after a two week closure, the ministry of education is looking into the possibility of postponing the opening date, Ingrid Anderson, a spokeswoman for the provincial government, said by email.

In the eastern province of Quebec, schools and daycares are closed until May 1, Bryan St-Louis, a media officer for the education ministry, said by email.

In the Maritime province of Prince-Edward-Island, schools “are closed until April 6 but that could change,” Jean Doherty, a spokesman for the provincial ministry of education told AFP.

Classes in Manitoba and Nova Scotia, closed since March 23, are due to start again on April 10. The provinces did not send AFP updated guidance by the time of publication.

The claim that each family will receive $950 every two weeks “is false,” Anna Anderson, a spokeswoman for Canada’s Minister of Finance, said by email.

On March 25, Canada’s legislature adopted a Can$82 billion emergency package to assist individuals, families and companies throughout the novel coronavirus crisis.

The act introduces the Canada Emergency Response Benefit (CERB), which grants a Can$2,000 taxable monthly allowance “for up to four months for workers who lose their income as a result of the COVID-19 pandemic.”

The CERB does not cover “each family” in the country, as posts claim, and those already receiving unemployment and sickness benefits are not covered.

However, workers still employed but not receiving income may apply, as well as those who are sick, quarantined, or taking care of someone who is sick with COVID-19.

Banks including RBC, CIBC, TD, BMO, Scotiabank, and NBC announced that for individuals struggling financially due to COVID-19, deferrals on payments for up to six months would be available. However, details on who qualifies were not made public, and decisions are made on a case-by-case basis with clients.

Mathieu Labrèche, head of communications for the CBA, said in an email that the federal government asked those banks for relief for Canadians.

“The current process includes answering a few questions so that we understand how their financial circumstances have been impacted by COVID-19,” Ana Aujla, a spokeswoman for TD, said by email.

Aujla said her bank is “receiving thousands of requests daily from across the country,” for mortgage deferral, and that thousands have been processed already.

“There are no income requirements and we review every application on a case by case basis,” AJ Goodman, a spokesman for RBC, told AFP.

Although payments will be deferred, interest on outstanding balances will continue to accrue.

The posts are correct in stating that student loans have been deferred. Part of the government’s response to the pandemic is “support for students and recent graduates.”

Starting on March 30, all borrowers will benefit from a “six-month interest-free moratorium on the repayment of Canada Student Loans.”

The complete list of programs deployed under Canada’s COVID-19 Economic Response Plan is available here. Beyond the measures mentioned above, they include wage subsidies for small businesses, credits for farmers, and a deferral on owed income tax.

On March 25, 2020, the US Senate approved a $2.2 trillion package to mitigate the novel coronavirus’ impact on the economy. It will provide direct cash payments to American families, $500 billion in grants and loans for small businesses, and $50 billion for airlines.

AFP Fact Check has investigated more than 180 false and misleading claims about the novel coronavirus.