US far from reaching herd immunity for COVID-19

A Facebook post shared thousands of times claims the United States has reached herd immunity for COVID-19. But experts say this is false, and that the country is far from the point where enough people have the immunity necessary to curb the disease’s spread.

“In fact, it was probably reached in May,” according to the post, which includes a chart from Johns Hopkins University that McBride incorrectly says supports the herd immunity conclusion. 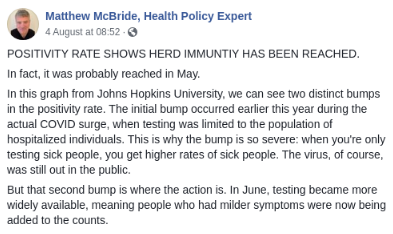 The novel coronavirus -- which causes COVID-19 -- has killed more than 750,000 people worldwide since late 2019, nearly a quarter of them in the United States, which has the highest number of infections of any country in the world but has nonetheless proceeded with reopening the economy.

A false belief that COVID-19 herd immunity has been reached could push people to take unnecessary risks, leading to more infections and a worsening of the coronavirus crisis.

“We’ve not reached herd immunity,” Dr John Wherry, the director of the University of Pennsylvania’s Institute of Immunology, told AFP by phone.

“We’re seeing infection rates continue to rise exponentially in some places, and without... social distancing and other efforts, we are not seeing that spread curbing, which means that the rate of transmission remains extremely high, as if the population as a whole is still very susceptible,” Wherry said.

“Herd immunity for different infections can vary a little bit. Typically depending on the infection you think about somewhere in the range of... maybe 60 to 80 percent of a susceptible population being immune,” he said.

Currently, “our estimates are somewhere between maybe five and 15 percent of the US population has been infected and might have immunity or antibodies.”

Dr Shelley Payne, director of the LaMontagne Center for Infectious Disease at the University of Texas at Austin, said that “the data do not indicate that herd immunity has been reached in the US.”

“Herd immunity will require that a large proportion of the population be infected and have immunity to the virus. We are not there yet,” she said by email.

Payne noted that Johns Hopkins University, which is tracking the spread of COVID-19, suggests that COVID-19 herd immunity will require 70 percent of the population to be immune to the disease.

“The number of confirmed infections in the US is about five million, which is less than two percent of the population. Even if this vastly underestimates the number of infections, we are nowhere near 70 percent,” she said.

According to the Mayo Clinic, herd immunity can be achieved through vaccination or natural infection. But COVID-19 vaccines are still in clinical trials, and it “isn't yet clear if infection with the COVID-19 virus makes a person immune to future infection.”

If people think it has been reached when it has not, they “will stop wearing masks, or think that social engagements are safer than they are,” Wherry said.

“The risk of thinking that we’ve reached herd immunity is that we will see the pandemic continue to spread, we’ll see increased mortality, and we’ll actually see that instead of being able to partially open the economy, we’re gonna have to shut down everything, causing even greater economic problems,” he said.

AFP Fact Check has debunked more than 600 examples of false or misleading information about the novel coronavirus crisis. A complete list of our fact checks on the topic in English can be found here.