US presidents can spend tax dollars with executive orders

Following US President Donald Trump’s executive actions extending financial relief to Americans hit by the coronavirus pandemic, a post shared tens of thousands of times on Facebook and Twitter claims US presidents cannot spend taxpayer dollars with executive orders. This is misleading; while Trump’s use of power is unique in this case, executive orders often involve moving, re-allocating or spending public funds, experts say.

Screenshot of a tweet containing misleading information, taken on August 13, 2020

A screenshot of the tweet was shared on Reich’s Facebook page the next day, August 9, with the caption “That’s not how this works.” 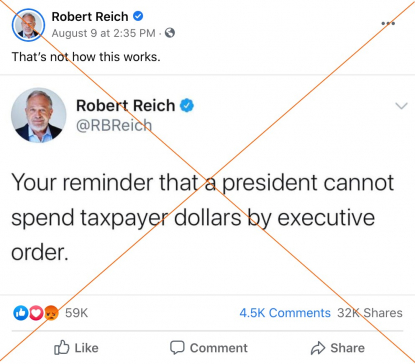 The executive memorandum provides for an additional $300 per week in federal contributions to Americans' unemployment benefits. A second memorandum orders a deferral in payroll taxes; while another extends relief on student loan payments and interest. An executive order talked of measures to protect against evictions and foreclosures.

Trump intervened after his Republican party and White House team failed to agree with opposition Democrats in Congress on a new stimulus package aimed at stopping vulnerable Americans from falling through the cracks of a pandemic-stricken economy.

“Their very actions involve the spending of federal funds, or, at least, the movement of funds from one activity to another. Presidents set regulatory and social justice priorities routinely by using executive orders to direct the federal agencies to focus on one activity rather than another, which involves the use of funds.”

Law professor Daniel Hemel of the University of Chicago weighed in: “The statement that the president does not have the power to spend money through executive order is in some sense true and in some sense false. There needs to be a congressional authorization and appropriation. But here, according to the Trump administration's not-implausible interpretation, there *is* congressional authorization and appropriation,” he said in an email.

“A blanket statement like that is incorrect,” he told AFP over the phone.

“It is not typically common that funds are spent at the direction of an executive order,” but “there is not a blanket prohibition on that behavior.”

Many federal funds connected to disaster relief offer some executive discretion on how they can be used, so “just because the president has not used executive authority in a given way before does not mean that that is an improper use of executive authority,” he said.

Hudak agreed with Dallek that Trump’s unusual exertion of power could result in legal problems.

In particular, Hudak said deferring student loan interest “seems like a pretty significant stretch in terms of what the law allows the president to do.” The extension on unemployment insurance, however, to him seems constitutionally viable, he said.

Whereas some aspects of government are explicitly spelled out, the constitutional framework for executive action is fuzzy, he explained. The power to issue executive orders is implied in the “Take Care” clause of the Constitution, which states: “he shall take care that the laws be faithfully executed.”

The rules for executive actions are not “clear or hardwired,” Hudak said, and courts have both held up and struck down presidents’ orders in the past.

“I think it depends on how the actions play out,” he said.

Faced with legislative hurdles, Trump has often turned to executive action, such as declaring an emergency on the southern border where he wanted to build a wall, or on policing standards following Black Lives Matter protests against racism and police brutality.