Skip to main content
Grafitti which reads Free HK is seen on the ground at the Hong Kong Polytechnic University campus in the Hung Hom district of Hong Kong on November 27, 2019 (Photo by Anthony WALLACE / AFP) (AFP / Anthony Wallace)

Photo of protesters fleeing Hong Kong by boat? This image has circulated in a Chinese report about police seizing illegal motorboats

An image has been shared hundreds of times in multiple Facebook posts which claim it shows Chinese police officers arresting a group of Hongkongers on a boat after they attempted to flee to Taiwan. The photo has been shared in a misleading context; it has circulated in reports about Chinese police seizing motorboats which were allegedly being operated without licenses.

The image was published here on Facebook on August 27, 2020. It has been shared more than 600 times. 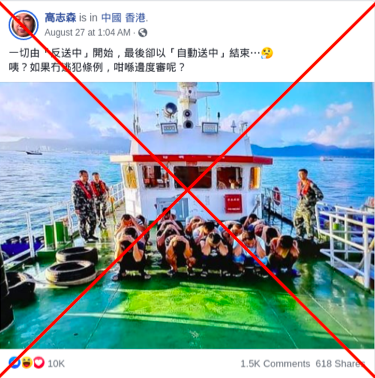 A screenshot, taken on September 2, 2020, of the misleading post.

The post’s traditional Chinese-language caption translates to English as: “It all started with the ‘anti-extradition bill protest’, but ended with ‘protester automatically turning themselves in’... Huh? So if there’s no extradition bill, where should this trial be held?”

The post refers to China’s arrest of a dozen people fleeing Hong Kong on a boat bound for Taiwan, including Hong Kong pro-democracy activist Andy Li, as reported here by AFP on August 28, 2020.

Comments from some Facebook users on the misleading post suggested they believed the image shows the arrests.

Another Facebook user commented: “Actually they want to tell Hongkongers not to oppose and just simply turn themselves in”.

A screenshot taken on September 4, 2020, of a selection of comments on the misleading post. 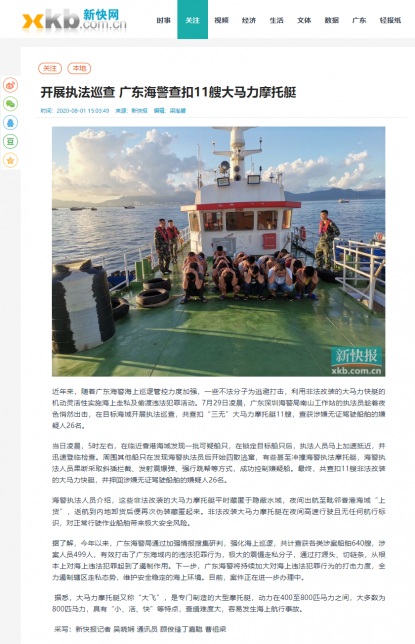 A screenshot of the Xin Kuai Bao report captured on September 4, 2020.

“The maritime police law enforcement officers resolutely adopted methods such as oblique interception; launching shock bombs; and forcibly jumping to control the suspected ship. In the end, a total of 11 illegally modified high-horsepower speed boats were seized and 26 suspects who were suspected of driving the ship without a license were taken away.”

A screenshot comparison of the misleading post and the photo in the Xin Kuai Bao report.

The arrests were also reported by other Chinese news organisations on August 1, 2020, including CCTV here, and YCWB here.