This is a UNICEF photo of a Moroccan child, not a former French education minister

A collage of two photographs – one of a young shepherd girl and another of France's first female education minister – has been shared hundreds of times in multiple Facebook and Twitter posts alongside a claim that they show the same person. The claim is false; the first photo shows a young Moroccan girl called Fouzia who was featured in a UNICEF report in 2015; the second photo shows Najat Vallaud-Belkacem, France's education minister from 2014 until 2017.

The collage was published here in a Facebook post on November 8, 2019. It was shared more than 470 times before it was deleted. 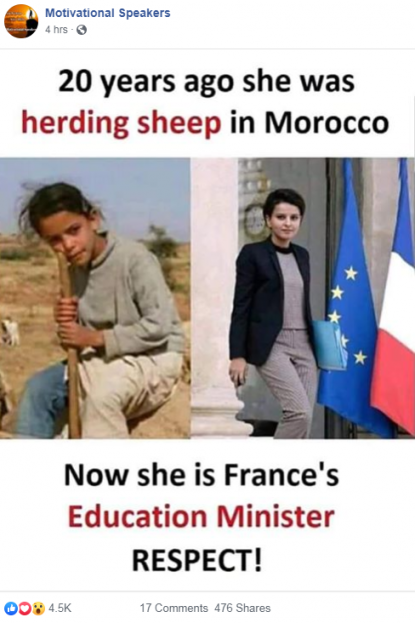 Text superimposed on the collage states: "20 years ago she was herding sheep in Morocco, now she is France’s education minister."

The caption refers to Najat Vallaud-Belkacem, who migrated to France from Morocco as a child and served as France’s first female Minister of National Education, Higher Education and Research from August 2014 to May 2017.

The claim is false; the first photo shows a young shepherd girl which was taken from a UNICEF report on Moroccan youth. The girl’s name is Fouzia and she is a native of Morocco’s Al Haouz Province, AFP's Spanish-language fact check blog reported here.

A reverse image search of the young girl’s photo from the collage found the photo was featured on page 26 of this UNICEF report published in 2015.

Below is a screenshot of the photo published in the UNICEF document: 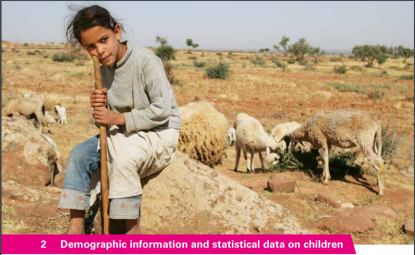 A screenshot of the girl's photo in the UNICEF report

The photo was taken by UNICEF photographer Giacomo Pirozzi in 2005, according to the photo credits noted at the end of the report. Below is a screenshot of the list of photo credits: 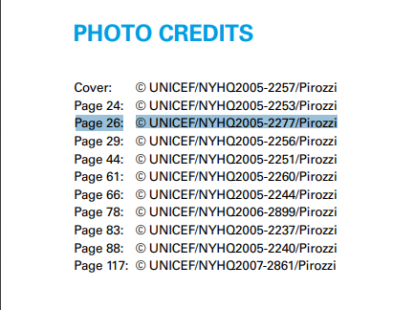 A screenshot of the photo credits in the UNICEF report

The image of Vallaud-Belkacem was taken from this Getty Images photo published on October 29, 2014. 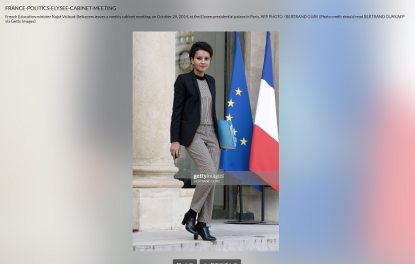 A screenshot of the Getty Images photo of Vallaud-Belkacem

Claims that the young girl in the photo is Vallaud-Belkacem have been previously debunked here by French news website Le Monde and here by US fact-check website Snopes.

It is true, however, that Vallaud-Belkacem was born in Morocco and spent her childhood in Beni Chiker – a mountain hamlet in the northern Nador Province.

Vallaud-Belkacem has recalled her early years in multiple interviews, here in English and here in French. In 1982, she moved to France at the age of four to join her father who had immigrated in 1975. Vallaud-Belkacem married civil servant Boris Vallaud in 2005, the very year the photo of the young shepherd girl was captured.

“Reports in the French press that I was a child shepherd hold a grain of truth ... We were quite poor. I helped my grandfather with the goats, drew water from a well, and spent most of the day in flip-flops. I don’t have many specific memories, but I carry with me the feeling of a happy family life,” she told Porter Magazine in March 2017.