A video and several photographs purported to show a broken stained glass window at a southern Sri Lankan mosque have been viewed thousands of times in various Facebook, Twitter and WhatsApp posts that claim the damage was linked to the nation's new regime. The claim is misleading; local police and a trustee of the mosque told AFP they believed the incident was likely caused by an intoxicated individual, rather than politically motivated.

This video shows a man describing the incident in Tamil language and pointing to the broken window behind him.

The two minute 20 second video has been viewed more than 2,000 times and shared over 120 times since it was published to Facebook on November 17, 2019. 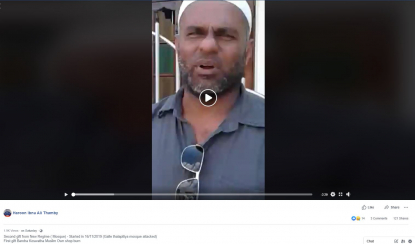 The caption states the vandalised mosque is located in Thalapitiya in the southwestern Sri Lankan city of Galle.

The “new regime” refers to the November 2019 electoral victory of President Gotabaya Rajapaksa, who launched a nationalist campaign and promised to fight religious extremism in the Buddhist-majority country, AFP reported here on November 17.

A fire erupted at a Muslim-owned shop in Bandarakoswatte, a small town located in northwestern Sri Lanka, in the early hours of November 17. The shop owner, however, said no foul play was involved in the blaze. Here is an AFP fact-check report on the incident.

Parts of the man’s narration in the video translates to English as:

“This kind of tragedy is happening to Muslims now because Muslims supported one side in this election. That is why they are doing this… We cannot be attacked every day in the name of being minorities. We are always attacked. Muslims should oppose this. Everyone should know today’s attack is on Muslims, the attack on the mosque, this will spread to the whole country.”

Photos of the damaged window were also shared here and here on Twitter alongside a similar claim.

The claim is misleading; a mosque trustee told AFP there was no evidence of politically motivated vandalism.

The trustee, Thalapitiya Sheikh Yusuf Saahib Waliyullah Dharga Mohammed Haji, told AFP via phone on November 18: “We are unable to ascertain if this was a premeditated attack and we also do not believe this was a politically motivated attack.

"It was most likely the work of an inebriated individual on the election night."

Mohammad said footage from security cameras at the mosque also did not show any individual or group throwing stones at the structure.

“We didn’t even take the initiative to inform the police as we felt it was a minor incident. But the area police visited the mosque on the morning of November 17 and offered to even deploy Special Task Force protection. We refused the offer as we don’t believe it will recur.”

Galle Police Division's Officer in Charge told AFP in a telephone interview on November 18 that the authorities had launched an investigation into the incident, but mosque leaders had told them they did not believe it to have been politically or racially motivated.

“It appears to be an act of an inebriated individual -- a common sight on election nights,” the officer said.

AFP also contacted A. K. Wijeyapala, a Centre For Monitoring Election Violence official in Galle, for an update on the incident. Wijeyapala said considering the area in which the mosque is located, it is unlikely that the attack was carried out with political or racial motivations.

“This mosque is located in an area that accommodates a bigger mosque just a few feet away. A politically or racially motivated attack likely would have targeted both mosques or would have aimed to inflict more damage,” Wijeyapala said.