A tweet claiming Canadians were given $2,000 a month by the government during the Covid-19 pandemic was shared across social media in posts criticizing the US Congress for backing a one-time $600 stimulus payment for most Americans. But the tweet misrepresents the relief available in Canada, where most financial support was reserved for individuals who lost their jobs due to the public health crisis. 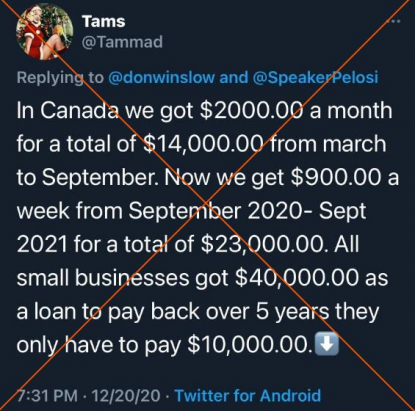 A second tweet, which also spread on Facebook as a screenshot, made a similar claim about Canadians receiving $2,000 a month while criticizing US “deficit hawks.”

The US Congress passed an initial $2 trillion economic relief package in March 2020, but has spent months negotiating over additional aid to help Americans struggling to make ends meet during the pandemic.

Just a day after Democrats and Republicans reached agreement on a new $900 billion package, President Donald Trump joined the chorus of criticism of the plan to issue direct relief of just $600 to most Americans.

However, the financial aid described in the tweets does not reflect payments made to all Canadians, nor does the first tweet correctly explain the small business loan program.

On March 25, 2020, Canada’s legislature passed an emergency bill responding to Covid-19. Many of the benefits it created were extended in a second aid package passed in August.

The $2,000 figure in the tweet refers to the direct aid made available through the Canada Emergency Response Benefit (CERB).

In contrast to the US Economic Impact Payment, which was a one-time check, CERB granted a Can$2,000 (about $1,551) monthly allowance to certain qualified Canadians.

Individuals had to show they lost their job due to the pandemic, were sick, quarantined, or taking care of someone who was sick with Covid-19, or were a working parent who stayed home without pay to care for children who were sick or at home because of school and daycare closures.

Canada has a population of about 35.1 million, but according to the most recent data available from October 4, CERB benefits had only been requested by 8.9 million unique applicants.

Screenshot of the Government of Canada website, taken on December 22, 2020

The CERB benefit is also taxable. No taxes were withheld from the checks, potentially leaving Canadians who did not plan ahead with large tax bills.

The $900 figure in the first tweet may be a reference to the Canada Recovery Benefit (CRB).

However, this benefit is not weekly as claimed, but provides Can$900 every two weeks after taxes. It requires reapplication for each eligibility period, up to 13 times, through September 2021.

Eligibility requirements include that the person has not left their job voluntarily. The CRB also has an income threshold of Can$38,000.

These loans were not given to all small businesses in Canada, as owners still had to apply via their local banking institutions.

According to the government, in December 2018, the Canadian economy included 1.18 million small businesses.

Screenshot of the Government of Canada website, taken on December 22, 2020