These photos show snakes at a farm in Vietnam, not in Myanmar

Three photos have been shared thousands of times in multiple Facebook posts alongside a claim that they show snakes at a farm in a Myanmar village. The posts, which urge Facebook users to share the photos, go on to claim that the couple who discovered the snakes won the Myanmar state lottery soon afterwards. The claim is false; these photos have circulated online since 2014 in reports about a snake farm in Vietnam. AFP found that the village cited in the misleading posts does not exist. 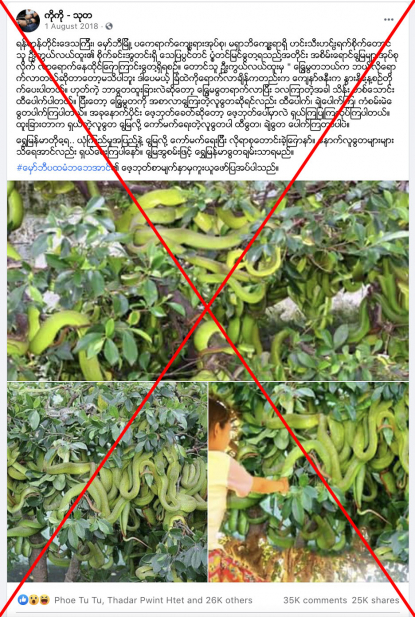 The misleading post’s Burmese-language caption translates to English as: “A bunch of green snakes seen in the pictures were found at the farmer, U Kwel Htoo’s farm at Ma Shar Bi village, Pa Ka Yauk village tract, Hmawbi township, Yangon region, Myanmar. U Kwel Htoo said, “I don’t know how they (snakes) came to my farm. But since they arrived, my wife has fed them milk. The miracle is we won the state lottery of MMK 1 billion (US$738600) one month after they arrived. And people who came to feed them (snakes) won the lottery or lucky draw. People who shared on Facebook also won the lottery.

“All golden Myanmar!! Please write down your wishes under the comment section with full confidence. Share this post as much as you can for other users to be able to see. Golden Myanmar must be rich with the power of snakes!”

A keyword search in Burmese found “Ma Shar Bi village” and “Pa Ka Yauk village tract” are not real villages in Hmawbi township in Yangon region or anywhere else in Myanmar.

In Burmese, the word for “Ma Shar Bi” means “none” or “never existed” and “Pa Ka Yauk” means “scam” or “meaningless”.

The photos in the misleading posts have circulated online since 2014 in various online reviews about Dong Tam snake farm in Vietnam.

A reverse image search on Google found the first photo was published here on a Russian-language website, Вьетнам on August 30, 2017.

Part of the Russian-language paragraph translates to English as: “Dong Tam Snake Farm is located in Chau Thanh District, Tian Jiang Province, 12 km from downtown Moy Tho. The farm is considered one of the world's largest snake centers, producing venom for local use and export, and a collection of more than 50 species of snakes. The farm is currently run by the military, with a large collection of not only snakes but also some animals such as crocodiles, bears, turtles, sheep and ostriches. Some of them are mutants due to the spraying of Agent Orange in the Mekong Delta during the war with the United States.”

Below is a screenshot comparison of the photo in misleading post (L) and the photo on Вьетнам website (R):

Another reverse image search on Google found the second photo was published here on travel site VisaVietnam on July 2, 2014.

Part of the article states: “Dong Tam Snake Farm is one of the country’s largest snake-raising centers where venom is produced for local use and export, with its collection of over 50 species of snake. This 12-ha-farm was formerly run by a retired Vietnamese soldier and expert-at-snake named Tran Van Duoc (Tu Duoc also). The farm is now under the operation of military, with a big collection of not only snakes but also some animals like: crocodiles, bears, turtles, sheep and ostriches.”

Below is a screenshot comparison of the photo in misleading post (L) and the photo on VisaVietnam.net.vn website (R):