Donald Trump’s campaign tweeted that Democratic presidential candidate Pete Buttigieg said he “doesn’t care” if Americans lose health insurance they have through their employers. This is false; Buttigieg was speaking about giving people a choice between public and private options, not expressing indifference about them losing existing coverage.

“Democrat Pete Buttigieg on whether 180 million Americans lose the health insurance plans they get through their jobs because of Medicare for All: ‘To be honest, I don't care,’” an account managed by Trump’s campaign said in a tweet, which has also been shared on Facebook. 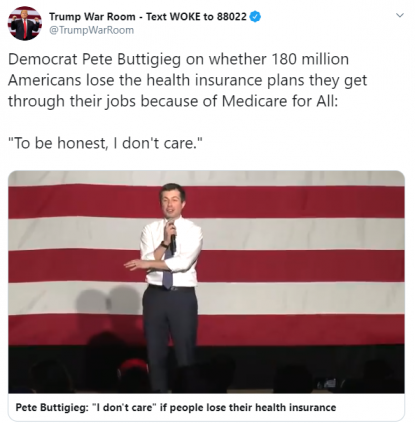 It includes a video clip in which Buttigieg says: “The question of whether it leaves private insurance intact, that’s actually up to the insurance companies. Either they’ll come up with something better that’ll compete with the plan I’m putting out there, or they’ll fail. And to be honest, I don’t care.”

The clip is of Buttigieg speaking in Salt Lake City, Utah on February 17, 2020. He was outlining his “Medicare for All Who Want It” plan, not the “Medicare for All” plan of some of his Democratic rivals.

In Buttigieg’s remarks on the issue -- which start at the 25:22 minute mark in this video -- he advocates having a public health insurance option, but giving people the flexibility to choose between it and private plans.

“I think my plan’ll be the best plan of all. If I’m right, everybody’ll pick it, and pretty soon it’ll be Medicare for All. But I’m not willing to assume or dictate that it’s gonna be the best plan for you -- I want you to figure it out on your own,” he says.

“Instead of deciding from Washington when you’re gonna make that change, we let you figure it out on your own,” Buttigieg says, then going into the remarks from the clip tweeted by the Trump campaign-managed account.

Health insurance is a key issue as Democratic candidates vie for their party’s nomination. Some -- including Elizabeth Warren and Bernie Sanders -- are pushing for universal government-provided coverage, while others such as Buttigieg favor incremental changes.