A video has been viewed thousands of times in multiple posts on Facebook and Twitter alongside a claim it shows a Japanese bullet train travelling from Osaka to Tokyo in ten minutes. The claim is false: the footage is actually a timelapse video of a 150-minute bullet train journey between Osaka and Tokyo.

Its caption, written in a mixture of English and Malaysian, reads: “Phew 4.800km/h. really fast.. when will we reach again 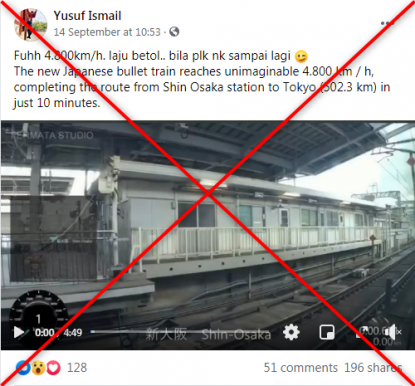 Shin-Osaka Station is a train station for the shinkansen, or bullet train, lines in the Japanese city of Osaka.

The same video has been viewed more than 6,500 times after it was posted on Facebook with a similar claim here, here and here; on Twitter here; and on YouTube here.

The claim, however, is false; the footage is actually a timelapse video of a 150-minute bullet train journey from Osaka and Tokyo.

A reverse image search and a subsequent keyword search on Google found this video posted on August 2, 2020, on YouTube channel Fermata Studio, which lists its location as Japan.

The caption reads in part: “This movie is a fiction. Normally it takes 2.5 hours from Shin-Osaka to Tokyo. Made by a method called ‘Time variant hyper-lapse/time-lapse’.

“Copy videos with altered titles and descriptions are circulating on Facebook, especially in Brazil and Malaysia. Three fact-checking sites have examined one of them and concluded that the video is fake and the description is false. They have published their findings along with screenshots of the fake video (in Portuguese). Moreover, one fact-checking site is currently investigating the copy videos.”

The person behind the YouTube channel Fermata Studio told AFP that they filmed the footage for the channel.

“I elaborately described words ‘simulation’, ‘fiction’, ‘hyper-lapse/time-lapse’ in the title and description of my original video to avoid misleading,” they said in an email on September 19, 2020.

“I have been filming window views from trains and aircrafts for the last seven years. Using those videos, I wanted to create a science fiction video that would allow people to experience an extreme speed that is impossible in reality.”

According to the Japan Rail Pass website, “Tokyo and Osaka are connected by the Tokaido Shinkansen line” and “The Nozomi is the fastest train as it completes the journey in just 2 hours and 30 minutes.”