Skip to main content
A woman takes a walk in Melbourne on September 6, 2020 as the state announced an extension to its strict lockdown law while it battles fresh outbreaks of the COVID-19 coronavirus. (AFP / William West)

An image has been shared thousands of times in multiple Facebook and Instagram posts that claim it shows Australian television network 7 News accurately predicted coronavirus case numbers for the state of Victoria on Sunday, September 13. The claim is false; the image has been taken from a 7 News report which was later updated to correct a typographical error; the official Covid-19 case number released by the state government for September 13 did not correspond with the purported case number in the misleading posts.

The image was published here on Facebook on September 12, 2020.

The post, which has been shared more than 1,100 times, shows a screenshot of a 7 News report. It is headlined: “Victoria records 37 new coronavirus cases on Sunday and 6 deaths”.

The post reads: “BUT ITS NOT SUNDAY YET! It looks like CH7 has just posted TOMORROWS magical numbers a little to [sic] early already this morning. Whoops, today is only Saturday morning.
"That’s not a Typo
"That’s rather strange”. 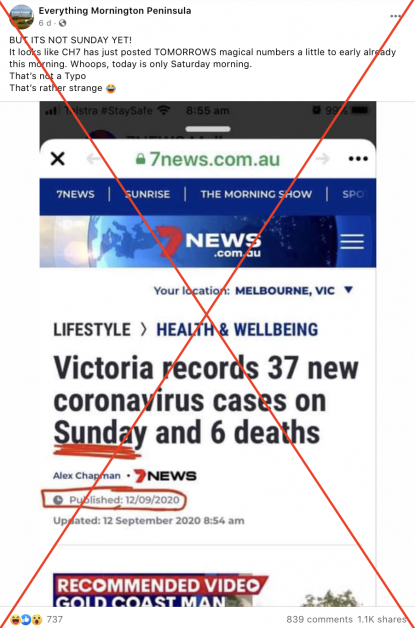 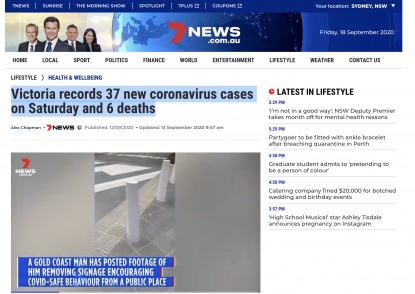 A screenshot of the original News 7 article as of September 18, 2020

A correction at the end of the article indicates that there was a typographical error in the article’s earlier headline: “Editorial note: A previous headline on this article stated these were Sunday’s cases. This was a typo and they are, in fact, Saturday’s.”

According to the Victorian Department of Health and Human Services (DHHS), there were 37 new cases of Covid-19 and six deaths in Victoria on Saturday, September 12, 2020, matching the detail in the amended 7 News article.

In a Sunday, September 13, 2020 media release, the state of Victoria announced that it had recorded 41 new cases and seven deaths that day.