The photos were published on Facebook here on November 15, 2019, the same day a 7.1-magnitude earthquake struck off the coast of the Indonesian province of North Maluku.

The quake, which hit roughly an hour after midnight, forced residents to flee their houses, as reported here by AFP.

Below is a screenshot of the misleading post, with the photos numbered by AFP: 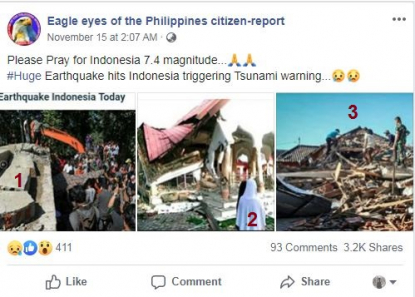 The photos have been shared in a misleading context; reverse image searches and subsequent keyword searches found they were taken after two different earthquakes hit Indonesia in 2016 and 2018.

The first photo is identical to a Getty Images published here. It was taken in December 2016 after a strong earthquake rocked Aceh, a province in northwestern Indonesia.

Below is a screenshot comparison showing the first misleading photo (L) and the Getty Images photo (R):

The Getty Images photo caption reads: “INDONESIA-QUAKE Members of a search and rescue team and residents carry the body of an earthquake victim in Pidie Jaya, Aceh province on December 7, 2016. At least 52 people died and dozens were feared trapped in rubble after a strong earthquake struck off Aceh province on Indonesia's Sumatra island on December 7, officials said.”

The second photo corresponds with the 11-second mark of this AFP video that was also taken after the Aceh earthquake in December 2016. The video has been embedded below.

The video’s caption reads: “At least 41 people are killed and hundreds injured after a strong earthquake struck off Aceh province on Indonesia’s Sumatra Island.”

Below is a screenshot comparison of the second photo in the misleading post (L) and the AFP video (R):

The Aceh earthquake killed at least 100 people and left tens of thousands displaced, according to this AFP report published on December 13, 2016. The earthquake also levelled thousands of structures, including mosques, and struck at dawn as many in the predominantly Muslim area were preparing to pray.

The third photo in the misleading post is identical to a European Pressphoto Agency (EPA) photo published on August 6, 2018. It was taken after an August 2018 earthquake in Lombok, an island in the Indonesian province of West Nusa Tenggara.

Below is a screenshot of the photo on the EPA website: 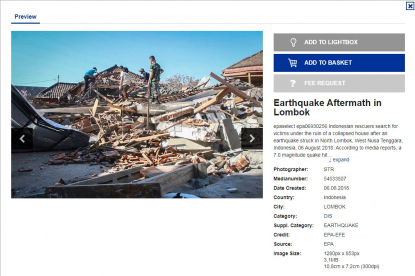 The photo caption reads: “Indonesian rescuers search for victims under the ruin of a collapsed house after an earthquake struck in North Lombok, West Nusa Tenggara, Indonesia, 06 August 2018. According to media reports, a 7.0 magnitude quake hit Indonesia's island of Lombok on 05 August, killing at least 91 people.”

Below is a screenshot comparison of the third photo in the misleading post (L) and the EPA photo (R):

More than 500 people were killed and hundreds of thousands left homeless in the series of earthquakes that hit Lombok in August 2018, AFP reported here.