A photo has been published on multiple news sites, blogs and on Facebook alongside a claim that it shows an instance of “genocide” against the Rohingya people in Arakan, Myanmar. The claim is false; the photo has circulated online since March 2015 in media reports about a student-led protest in the town of Letpadan, Myanmar, more than two years before a military crackdown on Rohingya Muslims in the country.

The photo was published here on Facebook on November 23, 2019. It has been shared more than 870 times.

The image shows several people wielding batons surrounding a person seated against a wall in a defensive position.

The post's caption and the text superimposed on the image read: “This is the witnessed of Rohingya genocide was in Arakan states Myanmar”. 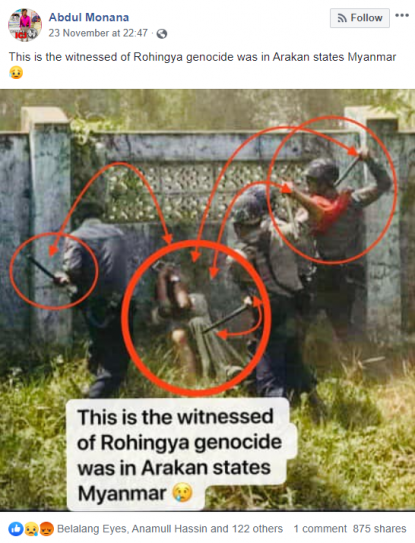 A 2017 military crackdown against the Rohingya minority in Myanmar led to widespread violence and the displacement of hundreds of thousands of people. The crisis prompted dozens of countries to formally accuse Myanmar of violating the 1948 Genocide Convention, AFP reported here on November 21.

The photo was also shared here on Turkish news site World Bulletin, here on a Thai-language blog and here on a Malay-language blog alongside a similar claim. It was also described as showing Burmese soldiers attacking a Rohingya Muslim here by Pars Today, an Iranian news agency.

The claim is false; the photo was taken in March 2015 during a protest against an education reform bill near Yangon, Myanmar’s capital.

The photo appears at the 30-second mark of the video embedded in the BBC report. The reporter narrating the video can be heard saying at this point: “A photographer caught this moment as four officers cornered a defenceless man.”

The photo was taken more than two years before the violent crackdown against the Rohingya, which began in August 2017, according to the United Nations.

Below is a screenshot of the BBC report: The report also states: “Sixty-five people have appeared in court in Myanmar to be charged over a student protest that ended in violence. The group, a mix of students and activists, were arrested while taking part in a protest two weeks ago against a new education bill.”

The report adds that clashes between police and protesters broke out in Letpadan, a town roughly 300 km southeast of Rakhine, the state where the Rohingya conflict is centered. AFP also reported on the student protest here.

Below is a screenshot showing the distance between Letpadan and Rakhine state on Free Map Tools: 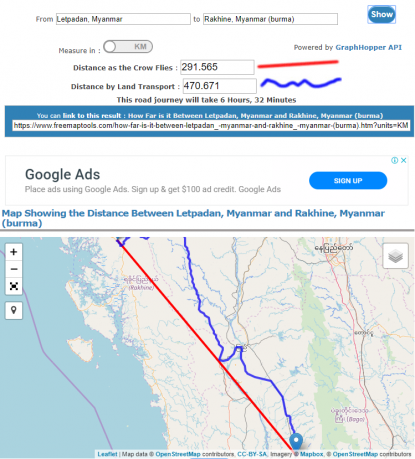 The misleading Facebook post also claims Arakan is a state in Myanmar. Arakan is, in fact, a coastal region in the southern part of the country, according to Encyclopedia Britannica.