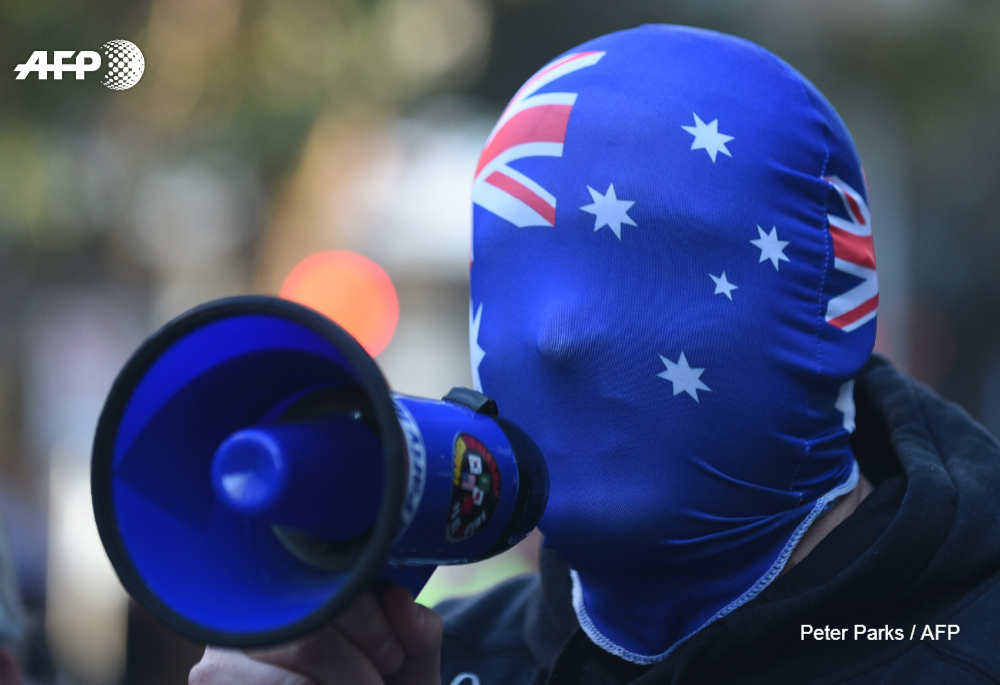 A Facebook post has been shared tens of thousands of times which claims that people who cross the Australian border "illegally" are eligible to receive a job, a driver’s license, a $70,000 grant, and numerous other benefits. The claim is false; Australian immigration laws and government policy ban people who they deem to have crossed the border illegally from settling in Australia.

This Facebook post was published in February 2019. It has been shared more than 49,000 times. The post makes comparison references to purported immigration practices in several other countries and claims that people who cross the Australian border "illegally" are entitled to a range of generous benefits. It reads in part:

“IF YOU CROSS THE AUSTRALIAN BORDER ILLEGALLY, YOU GET:
A JOB, A DRIVERS LICENSE, HEALTH CARE CARD, WELFARE, FOOD VOUCHERS, $70,000 GRANT, RENT ASSISTANCE, FREE HEALTH CARE, FREE EDUCATION, A LOCAL MEMBER CHAMPIONING YOUR CAUSE, BILLIONS OF DOLLARS WORTH OF PUBLIC DOCUMENTS PRINTED IN YOUR LANGUAGE, THE RIGHT TO CARRY YOUR COUNTRY’S FLAG WHILE YOU PROTEST YOU DON’T GET ENOUGH RESPECT, A PLACE OF WORSHIP BUILT EXCLUSIVELY FOR YOUR RELIGION,
I JUST WANTED TO MAKE SURE I HAD A FIRM GRASP ON THE SITUATION !!!
PLEASE KEEP THIS GOING.
IT’S TIME TO WAKE UP AUSTRALIA!!!!” 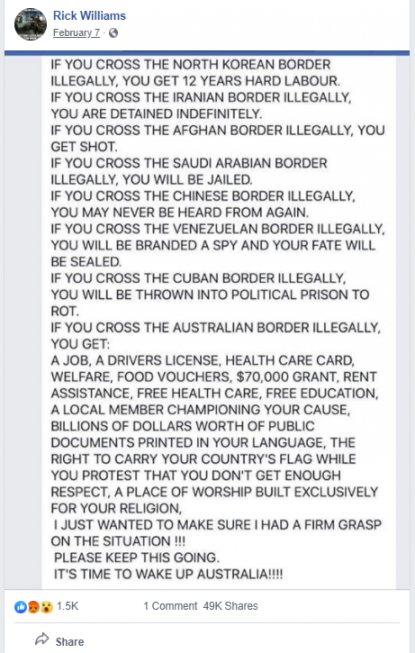 The claim is false; Australian immigrations laws and current government policy ban anyone who "arrives in Australia illegally by boat" from settling in Australia.

It is against the law for non-citizens without a visa to enter Australia's migration zone under the 1958 Migration Act. Since 1992 under the Migration Amendment Act, non-citizens who are considered to have entered the country illegally have been subject to mandatory detention.

The migration zone is defined in the Migration Act as "the area consisting of the States, the Territories, Australian resource installations and Australian sea installations."

In an effort to curb arrivals by sea, the government under former prime minister Julia Gillard passed amendments which resumed Australia's offshore processing program in Nauru and Papua New Guinea in August 2012.

The policy meant that people who entered Australia without a visa would be transferred to Nauru and Papua New Guinea for processing. This resumed the policy -- dubbed the 'Pacific Solution' -- which stopped with the transfer of refugees from Nauru to Australia in 2008.

In July 2013, the government of former prime minister Kevin Rudd announced the Australia and Papua New Guinea Regional Settlement Arrangement, which allowed asylum seekers with legitimate claims to potentially resettle in Papua New Guinea. The arrangement also meant that those who attempted to enter Australia prior to processing would be barred from ever settling in Australia.

“As of today asylum seekers who come here by boat without a visa will never be settled in Australia,” Rudd said when announcing the agreement.

Arrangements were also signed with Cambodia in September 2014 and the United States in November 2016, but only for resettlement of people they deemed to be legitimate asylum seekers.

The program, however, has been criticised. In 2018, the United Nations High Commissioner for Refugees said “circumstances and conditions for refugees under Australia’s ‘offshore processing’ policy have had severely negative impacts on health, and particularly significantly mental health.”

CORRECTION: this post was updated 3/12/2019 to correct the timeline and government responsible for the reintroduction of Australia's offshore processing program.