Photos circulating on Facebook purport to show UK Prime Minister Boris Johnson banging a traditional Burmese gong in support of people in Myanmar after a military coup on February 1, 2021. The claim is false: the photo shows Johnson celebrating Britain’s split from the European Union on January 31, 2020.

The photo circulated on Facebook pages in Myanmar, including here, here, and here.

“Bad omens for military fiends,” reads the caption on a Burmese-language post. It has been shared more than 300 times since February 4, 2021. 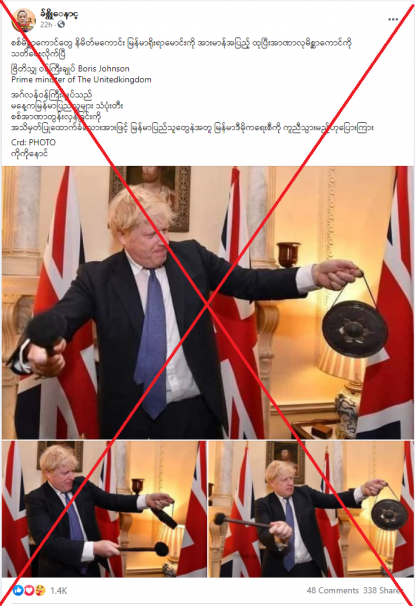 The screenshot of the misleading post, taken on February 5, 2021

The coup sparked global outrage and protests in Myanmar, with a movement gathering steam online calling on the public to voice opposition every night by banging pots and pans.

The military justified its seizure of power by alleging widespread fraud in November elections that Aung San Suu Kyi's NLD won in a landslide.

While Britain has condemned the detention of Aung San Suu Kyi and called for her immediate release, the photos circulating on Facebook are unrelated to the coup in Myanmar.

A reverse image search on Google found a news report featuring the photos of Johnson banging the gong published by UK tabloid The Sun on February 1, 2020. 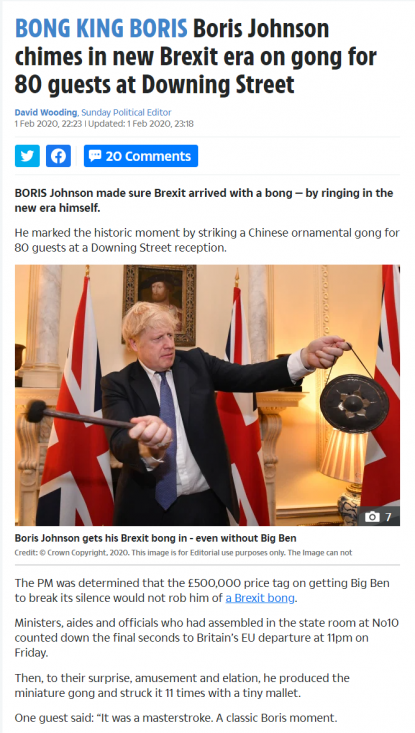 Screenshot of the report published by the Sun, taken on February 5, 2021

Britain became the first nation to leave the European Union at 11 pm (2300 GMT) on January 31, 2020, cutting ties with the bloc after more than four decades of membership.

The split followed years of political wrangling after Britons voted to leave the EU in a 2016 referendum that bitterly divided the nation.

“Ministers, aides and officials who had assembled in the state room at No. 10 counted down the final ­seconds to Britain’s EU departure at 11pm on Friday. Then, to their surprise, amusement and elation, he produced the miniature gong and struck it 11 times with a tiny mallet,” the article reads.

The photos were also featured in an article by The Guardian newspaper, which credited the images to Downing Street photographer Andrew Parsons.