Three images published on Facebook and claiming to show Chinese Muslim women tortured in detention camps have been shared hundreds of times in Nigeria. However, the claims are misleading; the images are victim reenactments of torture methods described by members of Falun Gong, a religious group banned in China.

The claim was posted here on Facebook on February 25, 2021, and has been shared hundreds of times since.

The first photo shows a woman face-down on the bottom of a bunk bed with her head covered. Her hands and feet are tied behind her back and strung up to the top bunk.

The second photo features another woman with her hands and feet tied to all four corners of a bed. The third shows a woman sitting on the floor with her hands cuffed behind her to what appears to be a metal bar. 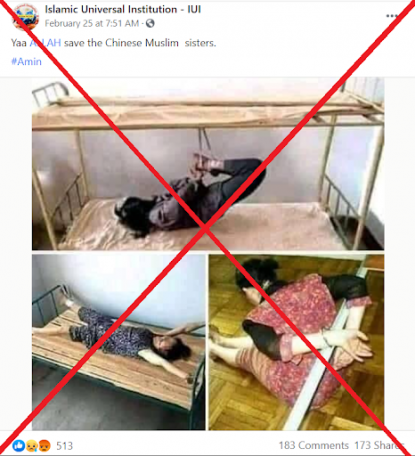 Screenshot of the misleading Facebook claim, taken on March 1, 2021

According to experts, China has detained at least one million members of the country’s mostly Muslim Uighur minority in recent years. International human rights groups have documented mounting evidence of forced labour, as well as forced sterilisations and torture. Beijing has dismissed these charges, saying it is operating vocational training centres to counter Islamist radicalism.

A recent BBC investigation based on witness testimonies reported systematic rape, sexual abuse and torture of women detainees by police and guards.

However, the three photos all show reenactments of alleged torture inflicted on Falun Gong practitioners.

Falun Gong is a religious movement founded in the early 1900s. The group, which emphasises moral teachings, was outlawed as an “evil cult” in China in 1999. Two decades later, practitioners continue to face arrests and torture. Human rights groups have also documented deaths, torture, and abuse at labour camps, as AFP reported.

AFP Fact Check ran a reverse image search on the three pictures and traced them to posts published on Minghui.org, a website run by Falun Gong followers that highlights testimonies from those who have been detained in Chinese camps.

According to one of these posts, the first photo of a person shackled to a bunk bed shows “re-enactments” of torture described by eyewitnesses at the Shandong Province Women's Labor Camp.

The second photo was featured in another post published by the same website on August 18, 2015. “Torture reenactment: Chained to a bed”, reads the image caption. 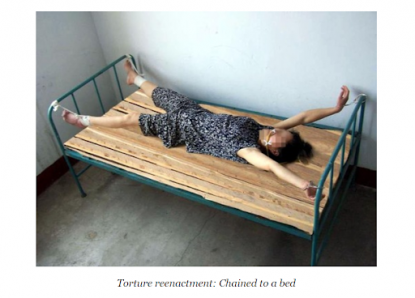 Screenshot from Minghui.org showing a torture reenactment, taken on March 1, 2021

The third photo was also published on Minghui.org on October 1, 2004, in a post titled “Torture Methods Used by Chinese Police in Jiamusi City, Helongjiang Province (Illustrations)”.

The image was taken from a series of three pictures depicting “various tortures involving handcuffs”.