As a fresh wave of conflict erupted between Israel and Palestinian militants, photos emerged in multiple Facebook posts which purport to show a photographer crying as he captured the violence on camera. The claim is false; the images show photographer Mohammed Al-Azzawi shedding tears after Iraq lost to Qatar at the 2019 Asian Cup.

“A photojournalist rolls down tears while capturing pictures of Masjid (mosque) Al-Aqsa in Jerusalem,” the caption reads.

The latest conflict between Israel and Palestinian militants started after violent clashes in Jerusalem's Al-Aqsa mosque compound, Islam's third holiest site, which is also holy to Jews as the Temple Mount.

Israeli forces moved in on Palestinian worshippers at the site, toward the end of the Muslim holy month of Ramadan.

The clashes prompted Hamas to launch rockets from Gaza towards Israel on May 10, and Israel responded with airstrikes that pummelled the enclave and killed 253 Palestinians. 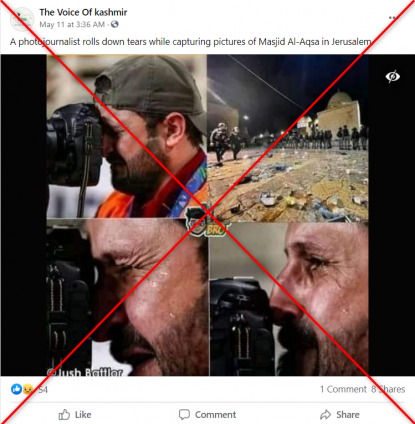 The same photo montage has been shared elsewhere on Facebook, for example here, here and here with a similar claim.

However, the claim is false; the images show an Iraqi photographer crying after the Iraqi national football team lost to Qatar in the 2019 Asian Cup.

A reverse image search on Google found the first image in the misleading photo collage published here on the official Facebook page of the AFC Asian Cup on January 24, 2019.

A second photo in the comments section, published the same month, shows another picture of the same photographer with a tear rolling down his cheek. 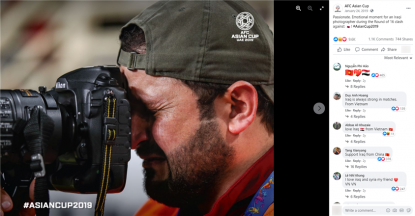 A screenshot taken on May 24, 2021 of the original image posted on Facebook

The photo was also tweeted here on the Asian Cup’s official account alongside text reading “AFC Asian Cup UAE 2019” and “#ASIANCUP2019”. The tweet's caption states: “Passionate. Emotional moment for an Iraqi photographer during the Round of 16 clash against Qatar! #AsianCup2019."

Passionate. Emotional moment for an Iraqi photographer during the Round of 16 clash against 🇶🇦 ! #AsianCup2019 pic.twitter.com/KZoXsp1N4U 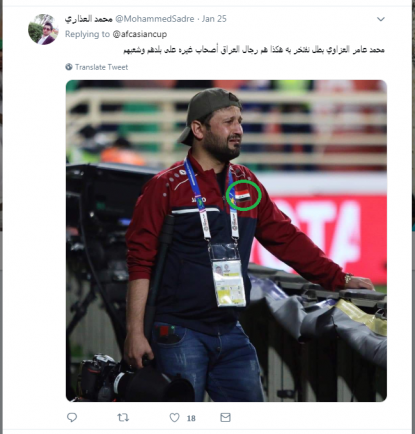 AFP ran a reverse image search on the photograph and found reports naming the man in the picture as Iraqi photographer Mohammed Al-Azzawi.

In an interview with Iraqi broadcaster Al-Iraqiya in February 2019, Al-Azzawi said he became emotional the moment he knew Iraq had lost the game.

The same photo has previously circulated in a misleading context. In 2019, AFP debunked posts claim it showed a photographer crying after an Indian cricketer was dismissed.