As tens of thousands of people protested on the streets of Myanmar following a military coup, two photos circulated on Facebook and Twitter purporting to show police snipers aiming their weapons from a rooftop bar in the country's largest city, Yangon. The claim is false: a comparison with Google Street View images of the location found the images were taken before the military coup in February 2021. In response to the misleading posts, a spokesman for the building's management company said in a Facebook post that the photos were "old".

“Police snipers are stationed at the highest points of the city as protest for democracy intensifies,” reads the Burmese-language caption in a misleading Facebook post published on February 8, 2021.

“Go tweet and let the world know! These pictures need to go out everywhere! #SayNoToMilitaryCoup.”

The photos show several police officers on a rooftop. One of them can be seen pointing a weapon towards the street below. 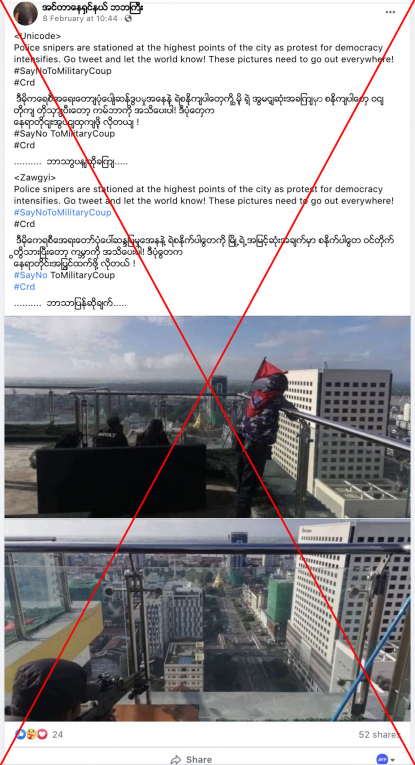 Tens of thousands of people have since taken to the streets to protest against the coup, despite a ban on demonstrations and heavy-handed police response.

Visual clues in the photos, however, reveal they were taken before the protests in February 2021.

Two buildings visible in the background of the two images can be seen covered in green cladding, as circled in red by AFP in the screenshot below. 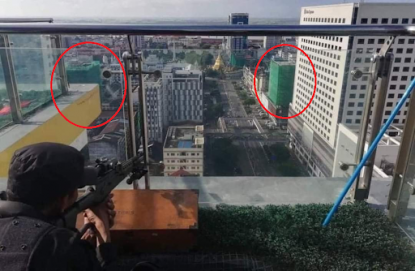 Screenshot of photo circulating in misleading posts (with green buildings highlighted by AFP) taken on February 10, 2021

AFP located the scene in photos to the Sakura Tower in Yangon on Google Street View.

A building seen on the right of the photo in the misleading posts, was photographed covered in green cladding in January 2018.

This cladding was removed in a November 2020 image seen on Google Street View, as shown below.

The building seen on the left of the photo in the misleading posts can be seen below on Google Street View in January 2018, when the green cladding was visible.

However, in a later photo from November 2020, the green cladding has been removed, as shown on Google Street View imagery below.

This indicates the photos circulating on social media after the February 2021 coup were in fact taken before September 2018.

A spokesperson for Sakura Tower's management company also said in this statement on Facebook that the photos circulating online in February 2021 were “old”.

“There is fake news spreading on Facebook, saying that there are snipers on the rooftop of Sakura Tower,” it said in a Burmese-language post February 10, 2021.

“Please be informed that those pictures are old and not related to the current events. Proof is the building under construction next to Sule Plaza, which was finished a few years ago.

"There are no snipers, police or soldiers on the roof of our building.”

The post features several photos that are marked: “Taken on 10th Feb 2021 by Sakura Tower Management” showing a green covering on the edge of the rooftop that is not visible in the misleading photos. 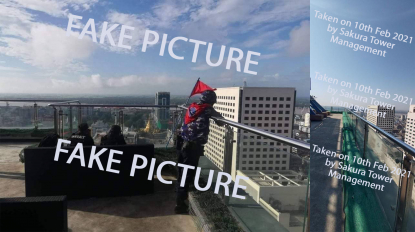