These photos have circulated in reports since September 2018, one year before the 2019 Australian bushfires began

Two photos of a koala joey sitting on a dog have been shared tens of thousands of times in multiple Facebook and Twitter posts  published in January 2020 alongside a claim the koala was "saved in the fires" by the dog in Australia. The photo has been shared in a misleading context; the photos have circulated in reports about an abandoned koala since September 2018, one year before the 2019-2020 fires broke out in Australia.

The caption reads in part: “A husband and wife in Australia opened their door to this sight. The family dog showed up with an infant koala on its back, saved in the fires.” 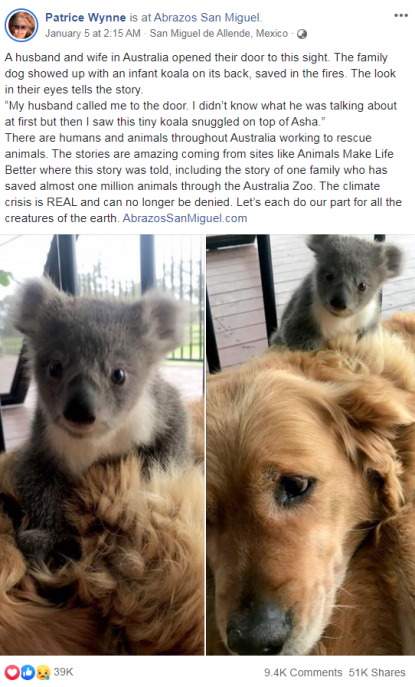 At least 25 people have died and more than 1,800 homes have been destroyed across Australia after huge bushfires broke out in September 2019, as reported by AFP here on January 7, 2020.

A University of Sydney study estimates nearly half a billion animals have been killed in the state of New South Wales alone since fires began in September 2019, according to this AFP report published on January 3, 2020.

The photos were also shared hundreds of times here on Facebook and here, here and here on Twitter, alongside a similar claim.

A similar Spanish-language claim was shared here, here and here on Twitter and here on Facebook alongside the photos in January 2020.

The photos have been shared in a misleading context; they have circulated in media reports since September 2018, one year before the bushfires broke out in September 2019.

A Google reverse image search found the same photos published in this September 28, 2018, report by the UK's Caters News Agency.

“Proud dog owner Kerry McKinnon, 45, got the shock of her life after discovering the tiny koala joey snuggled up with her five-year-old Golden Retriever Asha on Monday.

“The mum-of-three, from Strathdownie in Victoria, said the koala likely became separated from its mother during the night and wandered onto her back porch, finding comfort in Asha’s warm fur.”

Below is a screenshot of the Caters report: 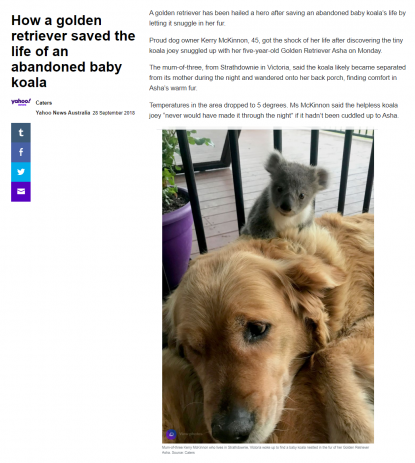 The same photos were also published in this report by Australian news site news.com.au on September 28, 2018 and here by MailOnline, the website for UK tabloid The Daily Mail on September 27, 2018. The photos were credited to Caters News Agency.